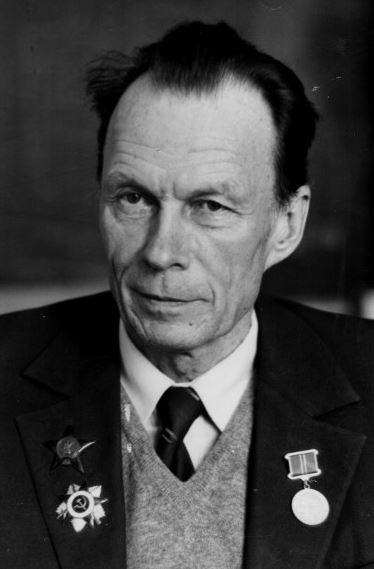 Arkady Kuz'min became interested in radio engineering early. While still a schoolboy, he constructed a superheterodyne receiver that was quite perfect for that time, passed the tests and received a "Radio Amateur" certificate. After graduating from school in 1940, he entered the radio faculty of the Moscow Power Engineering Institute (MPEI). But in August 1941, he was called up for military service and sent to the signal corps. After graduating from the military school of communications, he was sent to advance courses to study special radio communications equipment. In January 1944 A.D. Kuz'min was sent to the front as an appointed head of the radio station of Special Purpose Mobile Communication Center of the Deputy Commander-in-Chief Marshal of the USSR G.K. Zhukov. Until the very end of the war, he provided radio communications for G.K. Zhukov with the Headquarters of the Supreme High Command in Moscow (i.e. with I. Stalin). In June 1945, this communication center was transferred to the Far East to provide communications for Marshal of the USSR A.M. Vasilevsky with the Headquarters of the Supreme High Command in Moscow during the war with Japan. He was awarded the Orders of the Red Star and of the Patriotic War, as well as the four medals.

In October 1945 A.D. Kuz'min was discharged from the army, returned to Moscow and continued his studies at MPEI. While studying at the institute, and then in graduate school of the same institute, he developed methods for increasing the sensitivity of radio receivers and created one of the first noise generators in the country. After completing his postgraduate studies in 1954, he defended his PhD and was invited to the Lebedev Physical Institute (LPI) for working in radio astronomy sector, headed by S.E. Khaikin. In the first years of his work at Lebedev Physical Institute (LPI), Kuz'min actively participated in the development of methods for antenna measurements and measurements of the intensity of cosmic sources of radio emission, as well as in accurate coordinate tracking of the first Soviet space crafts "Luna-1,2 and 3" on their flights to the Moon.

In 1957, A.D. Kuz'min, together with V.A. Udal'tsov, used the 32-meter antenna of the LPI station in Katsiveli (Crimea) for the first time measuring the polarization of the Crab Nebula radio emission [1] that confirmed the synchrotron mechanism of this supernova remnant radio emission. At the very beginning of 1960s, already from observations with the Pushchino 22-meter radio telescope, Kuz'min found a break in the spectrum of the Cygnus-A radio galaxy - at frequencies above 1.4 GHz the spectral index of the radio galaxy turned out to be 0.5 more than at low frequencies. This made possible, on the basis of the model of the evolution of the spectra of synchrotron radiation, developed by N.S. Kardashev, to obtain the first estimate of radio galaxy age [2].

In the following decade, the main work of Arkady Dmitrievich Kuz'min was connected with the study of the planets radio emission. Using the numerous measurements of the planets flux densities with the Pushchino 22-meter radio telescope, as well as some theoretical models of their atmospheres, he had estimated the ammonia contents in the atmospheres of giant planets. For Jupiter's satellite Calisto the thickness of ice cover on its solid surface was estimated. For Mercury and Mars, whose distinctive feature is their rarefied atmosphere, A.D. Kuz'min had developed the models that made it possible to determine the main parameters of the planets soil cover. These results were based on observed variations of the planet's daily temperature and taking into account the eccentricities of their orbits and inclinations of their rotation axis. By this way, the permittivity, density, penetration depths of thermal and electric waves for the soils of these planets were determined.

However, during these years Kuz'min paid the greatest attention to the study of the Venus planet. Using the multi-wavelengths observations with Pushchino 22-meter radio telescope he constructed the radio emission spectrum of the planet. Then he suggested choosing the right one among two alternative models of the planet's atmosphere using the results of the polarization measurements of Venus radio emission with suitable interferometer. Corresponding observations he made together with Barry Clark at the Caltech radio interferometer. The parameters of the greenhouse model of the planet obtained as a result of this were used in the creation of the Soviet descent vehicles of the "Venera-4, 5 and 6" series, and were fully confirmed later by direct measurements of the "Venera-7 and 8" landers. These works formed the main content of A.D. Kuz'min's doctoral dissertation "Radioastronomical studies of Venus", successfully defended in 1965.

After the untimely death of V.V. Vitkevich in early 1972, A.D. Kuz'min was appointed head of the LPI radio astronomy laboratory as well as the Radio Astronomy Station in Pushchino. He worked in this position until 1988. Realizing that the most scientific researches at the Pushchino observatory had shifted since the late 1960s to pulsar topics, Arkady Dmitrievich decisively changed the direction of his research. Despite the great work to complete the construction and commissioning of the large phased array BSA radio telescope and the administrative burden, he quickly joined the research of pulsars. Among the most striking results of this period, we should mention the detection of a radio pulsar in the Geminga X-ray source [4], determination of the secular evolution of the orientation of the magnetic axis of pulsars, development of a method for reconstructing the initial pulse profile of a pulsar distorted by scattering in the interstellar medium. In 1974, Kuz'min, together with a group of employees of the observatory and one of the USSR State Standard institutes, proposed a pulsar time scale independent of terrestrial standards. In the very last years of his life, Arkady Dmitrievich was actively engaged in the study of giant pulses of pulsars. In 1970-80s many studies of pulsars were carried out by the staff of the Pushchino Observatory in close contacts with colleagues from England, Germany, USA and Australia.

A.D. Kuz'min wrote several monographs [5-9], three of which were translated to English and published in the USA. For more than 20 years, he was a professor at the Department of Radio Wave Propagation and Space Radio Communication of the Moscow Phys-Techn Institute, lectured on courses in radio astronomy and physics of planetary atmospheres and prepared five candidates of sciences during this time. He was a member of the International Astronomical Union and the European Astronomical Union, and from 1967 to 1977 he was the chairman of the section "Moon and Planets" of the COSPAR. Arkady Kuz'min was a veteran of the Second World War, Honored Scientist of the Russian Federation and Honorary Citizen of Pushchino town (Moscow Region).