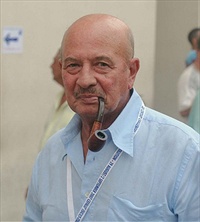 It is with extreme sadness and sorrow that we inform the scientific community that Prof. Lucio Paternò suddenly passed away on 21st of February 2017.

A pioneer in Italy for study of helio- and asteroseismology, he was a charismatic coordinator and organizer who made a great contribution to the development of solar research, playing a central role in his career in the understanding of solar and stellar internal structure and dynamics by means of the study of stellar oscillations. In addition he developed fundamental theories on angular momentum transport and the solar dynamo, demonstrating the key role played by rotation in shaping the evolution of the Sun. He made major contributions to the subjects participating in different solar experiments from the ground and the space. He published more than 200 scientific articles and reviews in national and international scientific journals.

Besides his formidable work as a scientist and teacher, Lucio Paternò held important administrative positions, in which he revealed excellent managerial skills. He was Director of the Institute of Astronomy of the Catania University from 1992 to 1997, member of the board of directors of the Inter-university Consortium for Space Physics from 1992 to 2003 and of the Italian Astronomical Society from 1994 to 1998. He was also member of the Scientific Council of the National Group of Astronomy of the National Research Council (CNR) from 1983 to 1995.

Lucio had just turned 77 last December, and from his retirement in the 2010, he was still active in the field, tireless collaborating with his former students and overall continuing to provide a critical support to colleagues of the Observatory of Catania by sharing his deeply insightful knowledge.

His unexpected passing is a terrible loss for the entire astrophysics community, and a deeply painful personal one for all who personally got to know him. We will always remember his kindness, his generosity, and his great sense of humour. We have lost a mentor, an exceptional colleague and for some of us a very close friend: a man with unique human qualities.

He will be very sorely missed by those who have been lucky to spend several scientific adventures with him, appreciating his ironic and happy approach to life, teaching us to see only the good in every situation.

All our thoughts are going to his wife Marcella, his daughter Antonia, his son Alessandro and the three beloved grandchildren: Mathieu, Lucio Jr and Gianmarco. On behalf of the entire scientific community, we express our deepest condolences for their terrible loss.