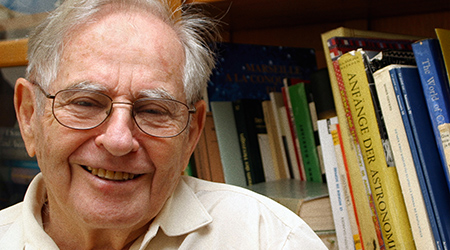 It is with great sadness that we announce the passing of Jean-Claude Pecker, IAU General Secretary 1964–1967, an astronomer and humanist who was highly influential in the development of the IAU and its programmes.

Born in Reims in 1923 to a Jewish family, Pecker spent his childhood in Bordeaux and showed an interest in astronomy from an early age, studying at the Lycée Michel de Montaigne in Bordeaux. During the Second World War, he first continued his education at the École Normale Supérieure (ENS) in Paris, in which he was admitted in August 1942, and at the Grenoble University, then in the free zone. This zone became occupied in March 1943, which forced him into hiding from December 1943 to August 1944, while both his parents were deported in May 1944 to Auschwitz, where they died. Then he became enrolled in the army of the liberated France, until the end of the war, in August 1945. After the war, he returned to the ENS, where the atomic physicist Alfred Kastler advised him to focus his doctoral thesis on theoretical astrophysics, which was not very well developed in France at the time. Pecker chose to study the physics of stellar atmospheres, under the supervision of Evry Schatzman, with whom he published an important article on the determination of the abundances of hydrogen and helium in fifty stars in 1947. After obtaining his PhD in 1950, Pecker held several positions at institutes including the newly founded Institut d’Astrophysique de Paris (IAP), the University of Clermont-Ferrand and the High Altitude Observatory in Boulder, Colorado. He was an astronomer at the Paris observatory from 1956 to 1964, and was then elected Professor at the Collège de France, where he taught until 1988.

In addition to his research and teaching, Pecker played an active role in the organisation of the astronomy and astrophysics community, both in France and worldwide. He served as director of the Nice Observatory from 1962 to 1969, and director of the IAP from 1972 to 1979. He was very involved in the IAU from early on in his career, becoming the first Assistant General Secretary from 1961 to 1964, and subsequently the General Secretary from 1964 to 1967. He then acted as advisor to the Bureau of the IAU for a further three years. In addition, he served as President of Commission 5 (Documentation and Astronomical data) from 1973 to 1979, and later as Chair of the Resolutions Committee (1994-1997). Bringing his enthusiasm for teaching and sharing astronomy with others, he proposed the School for Young Astronomers to the Executive Office, and was able to secure financial support from UNESCO for this programme, which continues today as the International School for Young Astronomers (ISYA).

His considerable efforts to share astronomy with the public included publishing books, promoting the building of planetariums and giving numerous talks. He was also known for his passion for sculpture, painting and drawing, having had several collections of watercolours published. He was able to combine his love of art with astronomy when he designed the IAU logo in the 1960s.

In recognition of his contributions to the development of astronomy and astronomy education both in France and internationally, Pecker received several awards, including the CNRS Silver Medal, the Jean Perrin Prize from the Société Française de Physique (SFP) and the Lodén Prize from the Astronomical Society of Uppsala, Sweden. He was elected member of the Académie des Sciences in 1977. His enthusiasm for the work of the International Astronomical Union led some to call him “Mr IAU”. He will be greatly missed by the IAU and by the astronomy community at large.

Jean-Claude Pecker produced a video interview, entitled With the IAU and inside the IAU since 1946 as a contribution to the IAU Centenary Symposium (S349) held at the Vienna General Assembly in 2018, which he was unable to attend. His last publication was in the IAU Catalyst in December 2019, entitled The “à-côtés” of an IAU General Secretary’s life. Teresa Lago, current General Secretary and Editor of the Catalyst, testifies “The exchange of e-mails with him, particularly in the last semester of 2019 regarding Catalyst and his confession ‘que j’ai aimé l’UAI, presque, dirais-je, d’un amour charnel!’ were an inspiration and a huge stimulus for me.”

- Announcement on the death of the former IAU General Secretary:
https://www.iau.org/news/announcements/detail/ann20007/

- With the IAU and inside the IAU since 1946 -video contribution:
https://www.iau.org/public/videos/detail/iaus349-pecker/