On Wednesday 30 March, the Lord Provost of City of Edinburgh Council will present the prestigious Edinburgh Medal to Kevin Govender of the IAU’s Office of Astronomy for Development and to Silvia Torres-Peimbert, President of the IAU, in a special ceremony at the 2016 Edinburgh International Science Festival.

The 2016 Edinburgh Medal is being jointly awarded to Kevin Govender and the International Astronomical Union (IAU) in recognition of their wide-reaching contribution to science.

The UK’s Astronomer Royal, Lord (Martin) Rees, will open the event, following which Govender and Torres-Peimbert will discuss their work and the future of Astronomy for Development. Professor Monica Grady will propose a vote of thanks for their hard work to date [1].

The joint award acknowledges the creation and establishment of the Office of Astronomy for Development, which integrates the pursuit of scientific knowledge with social development for and with those most in need. Under the pioneering stewardship of Kevin Govender, the Office of Astronomy for Development, hosted at the South African Astronomical Observatory in partnership with the National Research Foundation and the South African Department of Science and Technology, has successfully harnessed astronomy in the service of global education and capacity building.

The IAU established the Office of Astronomy for Development (OAD) in partnership with the South African National Research Foundation (NRF), with support from the South African Department of Science and Technology. The OAD was officially opened by Minister Naledi Pandor on 16 April 2011 at the South African Astronomical Observatory (SAAO) in Cape Town, South Africa. It is tasked with the implementation of the IAU Strategic Plan including the establishment of regional offices and three astronomy-for-development “Task Forces”: (i) Universities and Research; (ii) Children and Schools; and (iii) Public Outreach.

Kevin began work at the OAD in 2011 as its first Director. During his previous position as the Manager of the Southern African Large Telescope’s Collateral Benefits Programme at the South African Astronomical Observatory he worked extensively, especially within the African continent, in the area of “astronomy for development”. He chaired the Developing Astronomy Globally Cornerstone Project of the International Year of Astronomy in 2009 and was involved in the development of the IAU Strategic Plan. Coming from an experimental nuclear physics background and with experience from many community development initiatives in post-apartheid South Africa, Kevin was previously named one of the Mail & Guardian’s Top 200 Young South Africans, and received the National Science and Technology Forum’s Science Communicator award in 2011.

Edinburgh International Science Festival, founded in 1989, is an educational charity that aims to inspire people of all ages and backgrounds to discover the world around them. The organisation is best known for organising Edinburgh’s annual Science Festival, the world’s first science festival and still one of Europe’s largest. The two-week festival includes a diverse programme of innovative events. This year’s Festival runs from 26 March to 10 April 2016.

The organisation has a strong focus on education and runs a touring programme that visits schools around Scotland throughout the year. Within a large-scale programme of international work, it regularly presents events overseas and is currently the Major Programming Partner of the annual Abu Dhabi Science Festival.

The Edinburgh Medal is a prestigious award given each year to men and women of science and technology whose professional achievements are judged to have made a significant contribution to the understanding and well-being of humanity.

Made of Sterling silver, the medal is produced by Edinburgh firm Alexander Kirkwood & Son and features the original Edinburgh International Science Festival logo - a juggler performing with different symbols of science in the air.

Past recipients of the Edinburgh Medal:

[1] Tickets for the event can be booked online at www.sciencefestival.co.uk, by phone 0844 557 2686 or in person at The Edinburgh Festival Fringe Office, 180 High Street, Edinburgh. 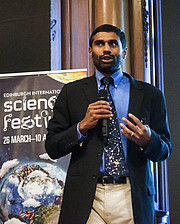