The Sound of the Great American Eclipse
Click to Enlarge

A team of researchers have developed a new way to experience the first total solar eclipse of the century visible from the United States. The team, led by Allyson Bieryla, Rob Hart and Daniel Davis from the Demo Lab at Harvard University and with the support of Wanda Diaz from the IAU Office of Astronomy for Development have developed an arduino-based device that will allow people to listen to a solar eclipse. The arduino detects changes in brightness and converts the amount of light into sound; the sound will be at a higher pitch when there is more light and a lower pitch when the Sun is being eclipsed by the moon.

The device has been developed in order to allow blind and partially sighted people to experience the eclipse first-hand. This project is just one of many initiatives undertaken by astrophysicist Wanda Diaz, who is herself blind, to make the wonders of astronomy more accessible to people with visual impairments. Wanda, who is a postdoctoral researcher at the South African Astronomical Observatory, will be presenting the eclipse stream live for students at the Athlone School for the Blind in Cape Town. 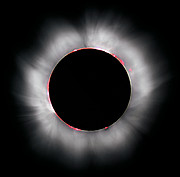