Election of the ISC President and Officers
Click to Enlarge

The new International Science Council (ISC), created by the merging of ICSU (International Council for Science) and ISSC (International Social Sciences Council), met in its first General Assembly in Paris, from 3-5 July 2018. The ISC will represent more than 180 scientific organisations from all around the globe. During the Assembly, the members elected the Officers (President, President-elect, 2 Vice-Presidents and the Secretary) and 10 Ordinary Members.

The elected President is Prof. Daya Reddy, born in South Africa, who holds the South African Research Chair in Computational Mechanics at the University of Cape Town.

The IAU wishes to congratulate Prof. Daya Reddy for his prestigious election and looks forward to a fruitful collaboration with the new Council, in particular in the areas of Science for Development and Inclusion, that Prof. Reddy knows well from his interaction with the Office of Astronomy for Development in Cape Town.

Prof. Reddy has been invited to give a welcome address on behalf of the ISC at the Opening Ceremony of the XXXth IAU General Assembly. 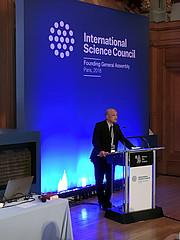