Former General Secretary and current Advisor of the IAU Executive Committee, Piero Benvenuti, has been made Commissioner of the Italian Space Agency by the Italian Minister of Education, University and Research.

Piero Benvenuti, the first Italian astronomer to hold the position of General Secretary of the IAU Executive Committee (2015–2018) has accepted his nomination as Commissioner of the Italian Space Agency (ASI) after Roberto Battiston, former President of ASI, had been removed from his position by the Italian Minister of Education, University and Research.

In his outstanding career, Benvenuti has acted as Project Scientist at the Space Telescope European Coordinating Facility and for the International Ultraviolet Explorer of the European Space Agency, as well as held positions of Director of the Center for Space Studies and Activities “G. Colombo” and full professor of high-energy astrophysics at the University of Padova, where he is now professor emeritus. He was also President of the Italian National Institute for Astrophysics and Vice-Commissioner of ASI.

After the end of his term as IAU General Secretary in 2018, Benvenuti has continued his contribution to the international astronomical community through his positions as Advisor of the IAU Executive Committee and representative of the IAU to UNCOPUOS. 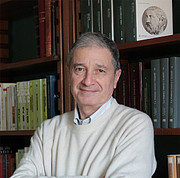