The IAU Working Group for Planetary System Nomenclature has approved a number of names for selected features on asteroid (162173) Ryugu, all of which are names found in stories and fairy tales for children. The new names come from Asia, Europe, and North America.

Hayabusa-2 arrived at Ryugu in June 2018 and has since studied the asteroid from orbit and by landing small rovers on its surface. Immediately after arrival the Hayabusa-2 Team got in contact with the IAU and requested the start of the official naming process for the features on the surface of this asteroid.

The IAU Working Group for Planetary System Nomenclature is responsible for the official naming of the planets, their satellites, and the surface features on all celestial bodies in our Solar System. The naming procedure is implemented through a carefully prepared list of themes which aim to link the bodies and their surface features together. Since Ryugu itself is named after the dragon god’s undersea palace in Japanese folklore, the approved theme for its surface features has become “Names in stories and fairy tales for children”.

Hayabusa-2 showed that boulders were important prominent features on the surface of this asteroid. However, as boulders or rocks are generally considered to be “non-permanent” features they have so far not been eligible for naming. Therefore the IAU Working Group for Planetary System Nomenclature has decided to introduce a new descriptor term for this type of feature: “saxum” (saxa, plural) for boulders and rocks, and to accept proposals to name boulders or rocks on small planetary bodies, under the following conditions:

The first 13 names officially approved by the IAU are listed below, along with a short summary of their origin and the descriptor of the named feature: 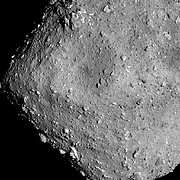