It is with great sadness that we announce that Norio Kaifu, former President of the IAU, passed away on 13 April 2019, aged 75, at his home in Japan.

Norio Kaifu served as IAU President from 2012 to 2015, having been Vice-President from 1997 to 2003. He was also Professor Emeritus at the National Astronomical Observatory of Japan (NAOJ) where he served as Director General from 2000 to 2006.

Kaifu received his PhD in radio astronomy from the University of Tokyo in 1972. In addition to his observational research on the interstellar medium, astrochemistry and star formation, he also lent his talents to the construction of the 45-metre radio telescope at Nobeyama Radio Observatory (completed in 1982). His valuable work was recognised during his lifetime with prestigious awards; he received the Nishina Memorial Prize for his pioneering work in millimetre-wave astronomy, and the Japan Academy Prize in 1998 for his contributions to research on the interstellar medium. In the 1990s, he participated in the construction plan for the Subaru Telescope in Hawai`i, and became the construction phase leader. In 1997, he was appointed as the first Director of the NAOJ Subaru Telescope and he put considerable energy into its completion, achieved in 1999. Throughout his career, he promoted regional cooperation in Asia, culminating in his brainchild, the East Asian Observatory (EAO).

Kaifu was passionate about astronomy outreach and used it effectively to expand public support for the science through popularisation, both globally and in Japan. He served as the Single Point of Contact for the International Year of Astronomy 2009 in Japan, and his contributions were instrumental to the global success of IYA2009. As President-elect, he consolidated these worldwide efforts through the IAU Office for Astronomy Outreach (OAO), based in Tokyo.

On the day he passed away, Amateur Astronomers Day was held in Brussels, as part of the commemorations of the IAU’s 100th anniversary. During this meeting, a short movie of IAU100 was shown, including footage of Kaifu. It was at about this time that he drew his last breath.

Norio was famous in Japan, both within the astronomical community and far beyond it. He wrote hugely successful books and articles for the public, and gave high-level advice to his government. He was a deeply sensitive, cultivated and open person. He was always pushing for cooperation, and was particularly tactful about the role of Japan in Asia, using astronomy as a diplomatic tool to build bridges between countries.

Kaifu-san, you will be missed by us all. 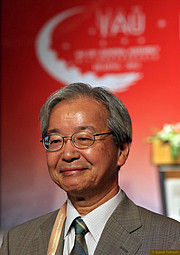