The IAU Office for Astronomy Outreach (OAO) and Sterren Schitteren Voor Iedereen (Stars Shine for Everyone — SSVI), in collaboration with Leiden University, are now welcoming proposals for the 2021 Telescopes for All project. A full explanation of the requirements for proposals and the submission process is available on the Telescopes for All webpage. Telescopes for All will distribute 12 telescopes to underserved communities around the world, with the aim of broadening the horizons of children, parents and educators by sparking an interest in science. The project also raises awareness of the importance of equal opportunities in pursuing a career in astronomy.

Proposals to the OAO must be submitted by 1 June 2021 and accepted proposals will be announced on 15 June 2021.

The Bresser 90/1200 refractor telescopes are generously donated by Bresser and will be delivered with a special mount, custom-made by the amateur telescope-making group Kijkerbouw of Armand Pien Public Observatory, Belgium. Each telescope is signed by inspirational people in the field of astronomy including astronauts, Nobel laureates, and scientists.

In the 2020 Telescopes for All, 17 communities across 5 continents each received a telescope. The recipient communities included children in rural areas of Tunisia, migrants and refugees in Spain, and children with hearing and visual impairments in Indonesia and Nepal.

The IAU Office for Astronomy Outreach (OAO) is a joint project of the IAU and the National Astronomical Observatory of Japan (NAOJ). The mission of the OAO is to engage the public in astronomy through access to astronomical information and communication of the science of astronomy. This is implemented through a network of IAU National Outreach Coordinators (NOCs) and the IAU’s engagement initiatives with the public. The work of the OAO is about building bridges between the IAU and the global astronomy community, and through international collaboration, to make astronomy accessible to all.

Sterren Schitteren Voor Iedereen (Stars Shine for Everyone — SSVI) is a cooperation between Volkssterrenwacht A. Pien vzw (Public Observatory Armand Pien) and Ghent University. The project is based on the idea that “all children in special education and vulnerable people should have the opportunity to admire the starry sky with the help of a telescope,” according to project leader and founder Jean-Pierre Grootaerd. SSVI is carried out by the amateur telescope-making group Kijkerbouw of the Public Observatory Armand Pien in Ghent, Belgium. 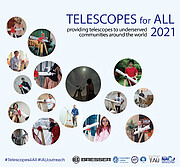