The fifth issue of the IAU Catalyst has just been published. In this volume, we hear from General Secretary Teresa Lago about the conclusion of her term, as well as from three big foundations which the IAU collaborates with: Chairman of the Shaw Prize Foundation Council Kenneth Young, the Gruber Foundation Executive Director Sarah Hreha, and the Kavli Foundation Director of Physical Sciences Christopher L. Martin. This issue also includes a review of forty-five years of IAU membership by outgoing Vice-President John Hearnshaw, as well as reports from Division J President, Commission H4 President, and Junior Members Working Group Organising Committee and reports from the four IAU Offices. France’s involvement in the IAU is presented by the President of the National Committee, and high-level officials from the International Union of Pure and Applied Physics summarise the Union’s gender initiatives, some of which also involve the IAU.

The Catalyst is issued twice a year as an electronic-only bulletin for the direct communication between the various IAU structures and the IAU Members as well as other international scientific organisations and institutions.

We hope you enjoy reading it and encourage you to get involved in future issues by submitting news and contributions about events or topics that you consider relevant to IAU members.

Previous issues of the IAU Catalyst are also available on the IAU website. 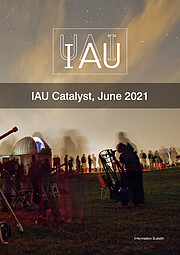