In response to an increasing need among the growing community of astronomy communicators, the International Astronomical Union is today announcing the advent of a new journal called “Communicating Astronomy with the Public Journal”. Subscriptions to print and online versions are free of charge to communicators.

A new peer-reviewed journal released today by the IAU will provide astronomy communicators with important tools and innovative resources to communicate more effectively the workings of the Universe to the public.

IAU President Catherine Cesarsky says “We are pleased to announce the first issue of the Communicating Astronomy with the Public Journal. The IAU is strongly dedicated to improving the global level of astronomy education and outreach.”

The journal provides astronomy communicators with a mix of resources, opinion and information on how to communicate more effectively to the general public the workings of the Universe. As Pedro Russo, Editor-In-Chief of the journal, explains, the CAP journal has an important aim: “As the astronomy education and public outreach community expands globally, it becomes increasingly important to establish a community of science communication experts.”

President of IAU Commission 55 Communicating Astronomy with the Public, Ian Robson: “Astronomy has an innate appeal to people of all ages, partly because it concerns the fascinating great questions ‘of life, the Universe and everything’ and partly because many of the data obtained with telescopes can be presented as objects of stunning beauty. Astronomy is a great example of how fascinating physics can be.”

Science communicators are encouraged to submit their own articles for publication explains Russo. “Public communication of astronomy is a burgeoning field of science communication. We would like to see the astronomy outreach community deeply involved in this journal’s evolution and production.”

Free subscription forms and the online version of the journal can be found at www.capjournal.org

Notes for editors
The CAP Journal is published by the IAU DIVISION XII Commission 55 Communicating Astronomy with the Public (http://www.communicatingastronomy.org). The journal is divided into nine main sections. The “Research & Applications” section contains peer-reviewed science communication ‘research’ articles. “News” and “Announcements” present information and updates, such as conference reports from the astronomy outreach community. “Resources” and “Innovation” provide a repository of outreach ideas and cutting-edge astronomy communication methods respectively. “Best Practices” aims to be a guide, containing case studies, to the techniques that work best in communicating astronomy. “Opinion” provides space for subjective discussions of topics related to astronomy communication.

The IAU is the international astronomical organisation that brings together almost 10,000 distinguished astronomers from all nations of the world. Its mission is to promote and safeguard the science of astronomy in all its aspects through international cooperation. The IAU also serves as the internationally recognized authority for assigning designations to celestial bodies and any surface features on them. Founded in 1919, the IAU is the world’s largest professional body for astronomers.

The International Year of Astronomy 2009 (IYA2009) will be a global celebration of astronomy and its contributions to society and culture. It will stimulate worldwide interest not only in astronomy, but in science in general, with a particular appeal for young people. IYA2009 will portray astronomy as a peaceful global scientific endeavour that unites astronomers in an international, multicultural family of scientists working together to find answers to some of the most fundamental questions that humankind has ever asked. 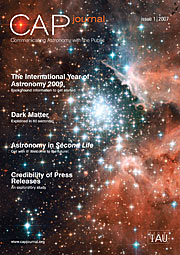