Bond receives $500,000 Gruber Cosmology Prize for major theoretical insights into the origin of the Universe
Click to Enlarge

J. Richard Bond, PhD, director of the Canadian Institute for Advanced Research Cosmology and Gravity Program, is the recipient of the 2008 Cosmology Prize of the Peter and Patricia Gruber Foundation, for groundbreaking theoretical work on structure formation and the evolution of the Universe.

"Professor Bond's work has provided the theoretical framework to interpret the observed inhomogeneities in the fossil radiation left over from the early stages of expansion of the Universe - the Big Bang," as stated in the official citation. His research "has helped us understand the transition from the nearly featureless early Universe to the wonderfully structured world of galaxies, stars and planets today."

Bond will receive the Gruber Cosmology Prize in September, 2008, at the Harvard Smithsonian Center for Astrophysics in Cambridge, Mass., USA. The prize consists of a gold medal and $500,000.

"When Dick Bond got into this field, we had ideas about how the galaxies formed but little evidence to back them up. Dick pointed the way to measurements that greatly improved the evidence, and he showed how to analyze the measurements," says Philip James E. Peebles, PhD, Albert Einstein Professor of Science and professor emeritus of physics at Princeton University. "Thanks to him we now have a tightly checked theory of the evolution of our expanding Universe." Peebles was one of two recipients who received the inaugural Gruber Cosmology Prize in 2000.

Bond's approach to cosmological questions combines a unique blend of original theory and full involvement in the observations made by experimental teams. He has helped usher the field through three decades of what has been described as its "golden age." Bond is known for solving outstanding and important problems through detailed and thorough calculations and comparisons with observation.

Many of the ground- and space-based telescopes that are sending an avalanche of data back to Earth today are doing so thanks to the work of Bond and his collaborators. Especially influential have been Bond's theoretical ideas on the nature and behaviour of the dark matter that holds galaxies together; the "cosmic web" paradigm for structure formation from the nonlinear dynamics of random density fields; the distribution and state of gas; the evolution of quantum fluctuations from inflation in the early Universe and how to probe them observationally. Much of the nomenclature and methodology was developed by Bond.

Working during the 1980s with George Efstathiou of Cambridge University, Bond theorized and developed detailed calculations to demonstrate that minute fluctuations in the cosmic background radiation (CBR), the photon afterglow of the Big Bang, would provide key clues to the fundamental cosmological parameters of shape, size, age and composition, in particular through the imprint of acoustic peaks and troughs on this "first light". Bond and his colleagues at the Canadian Institute for Theoretical Astrophysics at the University of Toronto, where he is a University Professor and past director, developed an impressive array of statistical tools that became standards in the field to analyse increasingly complex CBR experiments.

Milestones in the analyses included unravelling the cosmic consequences for galaxy formation theories of the first detections of CBR fluctuations by the Cosmic Background Explorer (COBE) satellite and a suite of pioneering experiments in the nineties. This was followed, in this decade, by the exquisite mapping of the CBR at increasingly high resolution by experiments exploiting powerful new detector technologies, including the balloon-borne Boomerang, the Cosmic Background Imager in Chile and the Arcminute Cosmology Bolometer Array Receiver at the South Pole where Bond played a key theoretical role. In accordance with the patterns first computed by Bond and Efstathiou, the maps showed that acoustic peaks exist, are viscously damped as the light is freed from matter, and that the escaping photons are polarized.

The analysis of the data supported most cosmologists' view that the Universe is "flat," and that it will expand forever instead of falling back on itself eons from now. At the same time, the analysis was used to reveal the age of the Universe, how much ordinary matter and dark matter exist, and that the dominant component of the density is the mysterious dark energy that does not cluster as dark matter does, but drives a late-time inflation. Bond is now involved in several other major CBR projects, including the European Space Agency's Planck satellite to be launched at the end of the year, the Spider balloon-borne telescope, and the Atacama Cosmology Telescope in Chile. "What we must marvel at is how simple the Universe appears to have been, characterized by a handful of fundamental cosmological parameters that we have now determined to good precision and will determine with very high precision with the new experiments," Bond says.

"To be able to say that in the course of one's career we've understood what the Universe is made of and how all of the structure we can observe arose - profound philosophical questions all - certainly has been and will continue to be an exhilarating ride! What more could you want with a career? Well, we want to detect gravity waves generated in the first moments of the Universe." A ride that, clearly, is far from over.

The Cosmology Prize honours a leading cosmologist, astronomer, astrophysicist or scientific philosopher for theoretical, analytical or conceptual discoveries leading to fundamental advances in the field. Since 2001, the Cosmology Prize has been awarded in collaboration with the International Astronomical Union. The Foundation's other international prizes are in Genetics, Neuroscience, Justice and Women's Rights. Nominations for the 2009 prizes are now open and close on December 15, 2008.

In 2000, the Peter Gruber Foundation and the International Astronomical Union (IAU) announced an agreement by which the IAU provides its expertise and contacts with professional astronomers worldwide for the nomination and selection of Cosmology Prize winners. Under the agreement, the Peter Gruber Foundation also funds a fellowship program for young astronomers, with the aim of promoting the continued recruitment of new talent into the field.

The official citation reads: The 2008 Peter and Patricia Gruber Foundation Cosmology Prize is proudly presented to J. Richard Bond for his pioneering contributions to our understanding of the development of structures in the Universe. Professor Bond's work has provided the theoretical framework to interpret the observed inhomogeneities in the fossil radiation left over from the early stages of expansion of the Universe - the Big Bang. Professor Bond's research has helped us understand the transition from the nearly featureless early Universe to the wonderfully structured world of galaxies, stars and planets today. 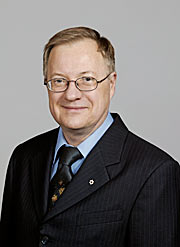