Astronomers from around the world have gathered in Paris for the start of the International Year of Astronomy 2009 (IYA2009), the largest network ever for sharing the wonders of the Universe with the public.

The official Opening Ceremony for the International Year of Astronomy 2009 (IYA2009) began today. It is taking place at the United Nations Educational, Scientific and Cultural Organisation (UNESCO) Headquarters, and features not only government representatives, diplomats, scientists from around the globe, young astronomy undergraduate students from more than 100 countries, but also astronauts, industrialists, diplomats, artists etc.  They are all in attendance to mark the first 400 years of modern astronomy, an era that started with Galileo's observations of the heavens with the telescope in 1609.

"After years of preparation, the time has come to launch this year, during which the citizens of the world will rediscover their place in the Universe, and hear of the wondrous discoveries in the making. The opening ceremony, at UNESCO Headquarters, is representative of the of the commitment of 136 countries to partake in the celebration of astronomy" says Catherine Cesarsky, President of the International Astronomical Union, who introduced the vision and goals of IYA2009 at the event.

The two-day ceremony hosts a wide range of activities including presentations by Nobel Prize winners Bob Wilson and Baruch Blumberg, talks about the latest astronomical discoveries, discussions on the role of astronomy in culture and public engagement, real-time astronomical observations and a closing performance by the Grammy award winners, the Kronos Quartet.

The Opening Ceremony launches the start of a year which will put astronomy firmly into the public eye, with the theme "The Universe, Yours to Discover". Hundreds, if not thousands, of events on global, national and regional levels  started up in the first weeks of the Year to celebrate astronomy and its contributions to culture and society, highlighting its importance as a globally uniting endeavour, attempting to answer some of life's fundamental questions.

The proceedings were opened by Koïchiro Matsuura, Director-General of UNESCO, who said, "People have always looked to the sky for answers to the questions ‘How did we get here?' and ‘Why are we here?' The sky belongs to everybody. Astronomy is an instrument to promote peace and understanding among nations and as such is at the heart of UNESCO's mission."

Matsuura added "We will encourage citizens of the world, especially young people, to learn more about the Universe in which we live and to explore the links that astronomy provides between the scientific and cultural spheres."

The official Opening Ceremony will take place over two days, with almost 1000 people in attendance. Events are accessible to all via a live webcast, currently broadcasting from www.astronomy2009.org/webcast.

UNESCO Focal Point for the International Year of Astronomy 2009

Chair of the Local Organising Committee 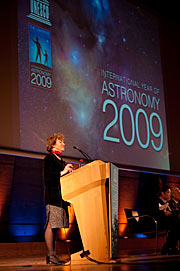