100 Hours of Astronomy project kicks off!
Click to Enlarge

The International Year of Astronomy 2009 (IYA2009) is about to reach new heights as the Global Cornerstone Project, 100 Hours of Astronomy, scheduled to take place from 2–5 April 2009, ramps up. The project invites amateur astronomers, educators, professional astronomers, planetaria, science centres and more to arrange events around the world during this 4-day period and to publicise them now on the project website. For those wishing to visit the frontiers of astronomy from their home, a 24-hour webcast from the largest telescopes on the planet will take a unique look behind the scenes at state of the art research facilities.

100 Hours of Astronomy is the single largest event taking place during IYA2009. It is a worldwide celebration composed of a broad range of activities aimed at involving the public. The event will take place over four days and nights, from 2-5 April 2009 (local time). During this period, people from around the globe will share the experience of observing the sky. For many, it will be their first glimpse of the wonders of the heavens through a telescope. For others, it is the perfect opportunity to impart their knowledge and excitement, helping unveil the cosmos to fresh and eager eyes.

The two highest profile activities are a live 24-hour observatory webcast from the largest telescopes in the world, and 100 hours of sidewalk astronomy events. The former will take place from 3 April 09:00 UT to 4 April 09:00 UT, when astronomers at professional observatories around the world will show their telescope domes and control rooms, giving an insider's view of these cutting-edge scientific facilities.

Mike Simmons, Co-Chair, elaborates: "This 100 Hours of Astronomy project is key to the International Year of Astronomy 2009. Astronomers are known for their enthusiasm and love of sharing knowledge, which are the main ingredients of 100 Hours of Astronomy. It's going to be an amazing time, as nothing of this scale has been attempted before. Every participant will be making history!"

For the 100 hours of sidewalk astronomy events, amateur, enthusiast and professional astronomers will combine their efforts to encourage as many people as possible to look through a telescope as Galileo did for the first time 400 years ago. The sidewalk events will peak with a 24-hour Global Star Party on 4 April (from local dusk to dawn), organised together with Sidewalk Astronomers and International Sidewalk Astronomy Night. Here telescopes around the world will be available for use, free of charge, allowing people to peer into space at breathtaking objects. Some traditional favourites will be ideally placed in the night sky for observation. These include the Moon, which is an astounding sight through a telescope, with its alien, yet strangely familiar, cratered landscape; and the planet Saturn, with its beautiful rings, once seen, never forgotten. That people from so many nations will be gazing up at the sky simultaneously, linked together by their common home in the Universe, is an inspiring realisation.

To keep track of developments and to promote sidewalk astronomy events effectively during the 100 hours, events are registered on www.100hoursofastronomy.org. Hundreds of activities have already been added, and the number is expected to balloon to even more impressive levels over the coming weeks. Anyone can set up an event, whether it is screening astronomy videos for a few hours on a single day or a 100-hour marathon event; only imagination sets the limit. The activities and events of 100 Hours of Astronomy will bring fresh audiences to astronomy and perhaps inspire young and budding scientists to pursue a career in astronomy.

Douglas Pierce-Price, 100 Hours of Astronomy Co-Chair, notes: "Every day we receive information about more events planned during the 100-hour window. The list is getting longer and pins are popping up all over our map of the world!"

The 100 Hours of Astronomy Opening Event will take place on 2 April 2009 at The Franklin Institute in Philadelphia, USA. Hosted by US national spokesman Derrick Pitts and featuring world-renowned Galileo expert Dr. Paolo Galluzzi, the interactive educational event will showcase Galileo's original telescope - the telescope first trained on the night skies - on loan for an exclusive exhibition entitled "Galileo, the Medici and the Age of Astronomy". There will also be a live science centre webcast discussing hot topics in astronomy.

Thousands of local events are being planned by science facilities and astronomy enthusiasts around the world, including telescope observing sessions, exhibitions, special shows and more. In many countries there will be public lectures by specially selected speakers, experts in astronomy, keen to participate in this planet-wide venture.

100 Hours of Astronomy is a venture of breathtaking scope that seeks to involve people from all walks of life around the globe and conveys a multitude of messages, from the personal benefit of astronomical knowledge to the pressing issue of curbing light pollution. Clear your agenda now for 100 hours of discovery! 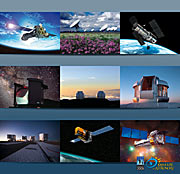