A 1300-page final report for the International Year of Astronomy 2009 was released today at the European Week of Astronomy and Space Science in Lisbon, Portugal. The report shows that at least 815 million people in 148 countries participated in the world’s largest science event in decades.

We have to go back more than 40 years, to the Apollo Moon programme, to find another science event that has engaged the public as much as the International Year of Astronomy 2009 (IYA2009). At its peak in 1969, Neil Armstrong and Buzz Aldrin’s first steps on the Moon reached an audience of more than a billion [1]. Forty years later, IYA2009 has brought space back to a mass audience once again.

The report is a compilation of the achievements of the 216 IYA2009 stakeholders — 148 countries, 40 international organisations and 28 global projects. The report shows the excitement, engagement and community involvement engendered by IYA2009. The report is intended to stand as a record of the legacy of this astonishing international celebration of astronomy.

In the report, about half of the stakeholder organisations discuss the number of people reached by the events they organised, as well as the budgets they had available to implement their activities. Funds equivalent to at least 18 million euros were devoted to IYA2009 activities — and this financial investment was complemented by enormous in-kind contributions from the amateur and professional astronomers, educators and organisers who helped to run the events.

The highest participation figures came from India, where over 700 million people were reported as being reached by IYA2009 events. This was mainly due to Indian astronomers proudly showcasing their work at the Republic Day parade in Delhi. With 30 000 people watching in person and an estimated 700 million watching on television, this was by far the biggest single event in the IYA2009 programme.

In Brazil, a budget equivalent to 2 million euros helped the organisers to reach 2.2 million people, with more than 16 600 events around the country, from national Olympiads of astronomy and astronautics to exhibitions and regional meetings on astronomy teaching. There was a big focus on education, with educational astronomy kits being produced, and 55 000 astronomy books and 20 000 Galileoscopes being distributed to state schools.

South Korea was one of the most active countries in IYA2009, with more than 500 activities reaching some 11 million people. A partial solar eclipse on 22 July was the highlight of the year, with viewing events widely held across the nation in 45 locations with over 400 000 people reached, from kindergarten children to the President of the Republic of Korea.

In the United Kingdom, the organisers used a budget of more than 1 million euros to reach over one million people: 300 000 at local star-parties, 300 000 at IYA2009 planetarium shows and the 400 000 people who attended the global exhibition project, From Earth to the Universe.

Catherine Cesarsky, chair of the IYA2009 Working Group, and the IAU’s President for most of  IYA2009, says: “As this report clearly shows, IYA2009 was an immense success. We can see that the variety and quality of projects around the world touched the lives of literally millions of people. It’s the first time that such a huge network has been put together to promote a single science communication project, so IYA2009 was also a learning process for everyone involved. This report, and the lessons we have drawn from IYA2009, will be a big help to anyone organising in a similar project in future.”

The global IYA2009 projects have also been more successful than anyone initially dared to imagine. Two worldwide star parties were held in 2009: 100 Hours of Astronomy in April, and Galilean Nights in October. In total more than three million people were involved, with many members of the public seeing night-sky objects such as the planets and the Moon through a telescope for the very first time — a life-changing experience for many.

The IYA2009 Cornerstone project, From Earth to the Universe, is a worldwide exhibition that brought the striking beauty and intriguing science of astronomy images to the public. It was staged in unexpected and accessible locations such as parks, metro stations, shopping malls, hospitals, libraries and even prisons. From Earth to the Universe has been exhibited in about 1000 locations in about 70 countries and 40 languages throughout the world in 2009 and has been viewed by at least 10 million people. The exhibition continues in venues around the world to this day.

Several IYA2009-affiliated movies were released during IYA2009, and received critical acclaim. More than 450 000 DVDs of Eyes on the Skies, a film documenting the history of the telescope, were distributed worldwide in 33 languages. The film received a MEDEA 2009 Jury Award. Another IYA2009 film, 400 Years of the Telescope, a 1.8 million euro production, has been seen by over ten million individuals. The film has garnered four peer-reviewed Telly awards, for animations, writing, cinematography and production. The astronomy Indiana Jones-style movie BLAST!, a 385 000 euro production, has been seen by 1.2 million people and has recently been broadcast on BBC World News, reaching over a million households around the world.

In the framework of the IYA2009 Cornerstone project, Developing Astronomy Globally, more than five thousand telescopes have been distributed to over 30 developing countries, to help promote astronomy education and outreach there. As part of the IYA2009 legacy, the IAU has initiated and is now implementing Astronomy for the Developing World, a pioneering ten-year plan to exploit astronomy in the service of education and capacity building in the developing world. The IAU has recently chosen the South African Astronomical Observatory as the location for its Office for Astronomy Development (OAD). The OAD will coordinate a wide range of activities designed to stimulate astronomy throughout the world.

The examples above are just a few of the many IYA2009 highlights that during 2009 helped the citizens of the world to rediscover their place in the Universe and to engage in a personal sense of wonder and discovery.

Robert Williams, the current IAU President, concludes: “Looking back at the activities and events and the popular reaction, we are able to truly gauge how often and how deeply IYA2009's motto, The Universe, Yours to Discover, was fulfilled during the Year.” 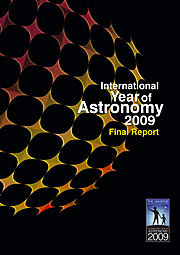 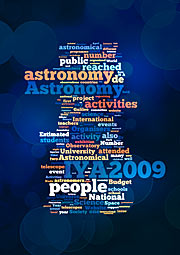