The NameExoWorlds contest, organised by the IAU, is now entering its historic final stage. The public voting on the shortlist of names for the ExoWorlds — 20 planetary systems comprising 15 stars and 32 exoplanets — starts today. The vote will decide the names for the selected stars and exoplanets.

Although people have been naming celestial objects for millennia, the International Astronomical Union (IAU) is the authority responsible for assigning official names to celestial bodies. The NameExoWorlds contest provides not only the first opportunity for the public to name exoplanets, but also — for the first time in centuries — to give names to stars. Twenty stars with known exoplanets in orbit around them are among the objects selected to be named.

Astronomy clubs and non-profit organisations from 45 countries submitted 247 proposals for the names of the 20 ExoWorlds. These proposals can now be voted on at the NameExoWorlds website. A full list of the ExoWorlds can be found here, which includes both single and multiple-planet systems. The names of the planets in each system, as well as their host stars, are open to public voting — excluding the five stars in the list that already have historical names [1].

Explanations for the names of the 20 host stars, in addition to personal messages from some of the scientists who discovered them, are available here. No registration is required to participate, though each device (computer or smartphone) can only vote once for each of the 20 systems. A full set of instructions on how to vote can be viewed here.

The clubs and/or non-profit organisations that successfully propose a winning ExoWorld name will receive a plaque and will be eligible to propose a name for a minor planet (subject to the usual rules for minor planet naming).

Lisa Kaltenegger from Cornell University officially opened the contest and cast the first vote at a public ceremony held during the IAU’s XXIX General Assembly in Honolulu, Hawai’i. The ceremony was accompanied by a special greeting from astronaut Scott Kelly, currently aboard the International Space Station, which was kindly facilitated by NASA.

[1] The astronomical designations of the newly named stars (e.g. 55 Cancri) will remain, as is common for all other types of astronomical objects. 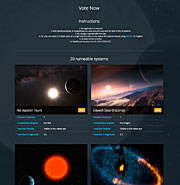