Additional funding from The Gruber Foundation is making it possible to support a third outstanding early-career astrophysicist with a Gruber Fellowship. In 2020 Ioannis Liodakis of the Finnish Centre for Astronomy with ESO (FINCA), University of Turku will receive the third fellowship grant.

Established in 2011, the Gruber Fellowship is awarded annually by the International Astronomical Union (IAU), supported by The Gruber Foundation (TGF), to assist promising young researchers in astrophysics. Until now, TGF has provided US$50 000 each year, and in 2020 the selection committee chose to share this amount equally between two researchers — Gabriela Calistro Rivera and Anupam Bhardwajand.

The financial support is intended to cover travel, subsistence and research expenses supplementing a postdoctoral appointment, thus boosting the early careers of exceptional astronomers and promoting a thriving research community. The host institute must be a centre of excellence in the fellow’s field of research, and be located in a different country from that in which the fellow’s PhD was awarded.

Now TGF has increased the yearly funding for the Gruber Fellowship. This generous additional funding will be used this year to support a third outstanding early-career astrophysicist. The IAU Gruber Fellowship selection committee has decided to grant the additional US$25 000 to Ioannis Liodakis of the Finnish Centre for Astronomy with ESO (FINCA), University of Turku.

Liodakis has recently embarked on a postdoctoral appointment studying the emission processes in blazars, a subclass of active galactic nuclei (AGN) that host the most massive black holes at their centres and produce highly relativistic jets. He plans to use a portion of the fellowship to promote diversity and inclusion within astronomy through international visitor programmes at FINCA, having previously led similar projects at Stanford University.

“I am greatly honoured to be selected as one of the 2020 TGF fellows,” says Liodakis. “It is incredibly rewarding to see my work recognised by the community. The Gruber Fellowship will not only support my research, but will also allow me to continue my efforts to increase diversity and inclusion in astrophysics, by supporting collaborative trips from researchers in typically underrepresented countries.”

In the future, the selection committee will decide whether to award the amount of US$75 000 to a single researcher, or to share it between two or three candidates. The next Gruber Fellowship in astronomy will be awarded in 2021.

“It is very rewarding that this year the IAU is able to enlarge the number of Gruber Fellowships to recognise even more future leaders of astronomical research through this partnership with The Gruber Foundation,” said Teresa Lago, IAU General Secretary. “The Gruber Foundation’s generous decision to increase the annual grant is an affirming sign of trust in the IAU and in the future of the thriving astronomy community.” 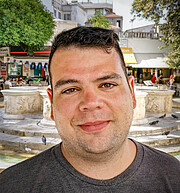