The Gruber Foundation Cosmology Prize, which is co-sponsored by the IAU, recognises scientists whose discoveries have driven fundamental advances in our understanding of the Universe. The 2022 prize has been awarded to Frank Eisenhauer, for his development of revolutionary technology that has provided evidence for the existence of a black hole at the centre of the Milky Way.

The Gruber Foundation today announced the recipient of this year’s Cosmology Prize. The prize is awarded annually to leading scientists and cosmologists who have made groundbreaking discoveries that change or challenge our understanding of the Universe.

The 2022 Gruber Cosmology Prize recognises Frank Eisenhauer of the Max Planck Institute for Extraterrestrial Physics for the revolutionary design of instruments that collected seemingly irrefutable evidence for the existence of a black hole at the centre of our galaxy.

Eisenhauer will receive the US$500 000 award as well as a gold laureate pin at a ceremony on 2 August at the XXXI General Assembly of the International Astronomical Union. The citation honours the “unprecedented and exquisite” precision of his instrumentation.

In 2018 the GRAVITY experiment traced the behaviour of various phenomena near Sagittarius A*, or Sgr A*, a supermassive, and therefore gravitationally voracious, invisible object near the centre of our galaxy. Thanks to Eisenhauer’s technical innovations, the GRAVITY team found that the behaviour of stars and gas near the galactic centre matches theoretical predictions consistent with the existence of a black hole.

Eisenhauer’s mentor and longtime collaborator Reinhard Genzel shared the 2020 Nobel Prize in Physics with Andrea Ghez and Roger Penrose for his contributions to work on Sgr A*.

GRAVITY had its basis in an earlier experiment for which Eisenhauer developed breakthrough technology in imaging spectroscopy — the measurements of how matter affects the absorption and emission of light. In 2003 the instrument, part of the Spectrograph for INtegral Field Observations in the Near Infrared (SINFONI) project at the European Southern Observatory’s Very Large Telescope on Cerro Paranal in Chile, began observing stars moving under the gravitational influence of Sgr A* as they execute their exceedingly rapid, highly eccentric orbits.

Two years later Eisenhauer and Genzel began discussing an opportunity to observe an upcoming event involving one of those stars, S2. Having measured a precise orbit of S2 after the first peri-passage in 2002, they were able to calculate that in 2018 the star would reach the part of its orbit where it would again pass closest to Sgr A*, a distance of only 17 light-hours. Combining the observing power of all four 8-metre telescopes at Paranal (through a process called interferometry) meant that the experiment could achieve the necessary thousandfold improvement in sensitivity over earlier interferometers, and thus resolve the resulting relativistic effects.

“This project was seen by some as technically impossible,” wrote one nominator for this year’s Gruber Cosmology Prize. Advocates for the project, however, argued that even if the experiment didn’t reach its goals, any technological advances would have broader benefits. Eisenhauer’s designs did indeed serve to revolutionise several kinds of instrumentation, including imaging detectors, laser metrology, and dual-beam operations.

The GRAVITY collaboration completed the instrument with barely a year to spare, and the initial results, as one nominator wrote, “can only be described as astounding and groundbreaking for many fields of astrophysics.”

Together these data provide enough evidence to satisfy the astronomical community that Sgr A* is indeed a black hole.

Among GRAVITY’s other significant contributions to astronomy are:

As GRAVITY’s advocates hoped, Eisenhauer’s innovations in technology — the ones for which he is receiving the 2022 Gruber Prize in Cosmology — have changed astronomy beyond just the study of Sgr A*. Other astrophysicists have already begun using SINFONI and GRAVITY instrumentation to study distant star-forming galaxies, black holes at the centres of nearby galaxies, and planets orbiting stars within our own galaxy.

In addition to the cash award, Frank Eisenhauer will receive a gold laureate pin and a citation that reads: “The Gruber Foundation is pleased to present the 2022 Cosmology Prize to Frank Eisenhauer for his innovative design and construction of the GRAVITY instrument, a near-infrared interferometric beam combiner for the ESO Very Large Telescope Interferometer in Chile. GRAVITY has opened up near-infrared interferometry to help us understand a wide range of astrophysical and cosmologically important phenomena, including black holes, and exoplanets.

Eisenhauer also led the construction of the SPIFFI/SINFONI, the first adaptive optics integral field spectrometer on an 8-m-class optical telescope. These instruments enabled the detection of general relativity effects close to a black hole by defining the orbit of the star S2 around the Galactic Center Massive Black Hole SgrA* with unprecedented and exquisite angular resolution.” 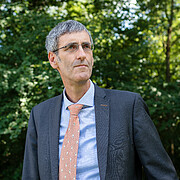