The IAU and Near Earth Objects 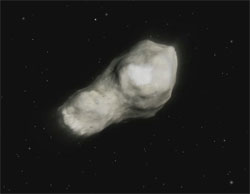 From time to time, we have all seen stories in the Press about Near Earth Objects that are about to hit the Earth on some date in the not-too-distant future.  Sometimes the IAU is mentioned in the story.  The aim here is to briefly describe what the normal practice is when a NEO is discovered and what part the IAU might be seen to play in this process.  In fact, the basic procedure is the same whether the discovery is of a comet, a Kuiper belt object, a Main belt asteroid or any other minor body in the Solar System.  When an observer discovers a body that is moving relative to the background, the information is always sent to the IAU Minor Planet Center (MPC) located at the Smithsonian Astrophysical Observatory in Cambridge, MA, USA.  This information should always give the position of the body (Right Ascension and Declination) and the time of the observation (using UT) for each observation made.  Most observers will try to obtain at least three such sets of observations during the night.  Though observers may try to derive an orbit for the object from their observations, this orbit is not usually sent to the MPC, the orbit that is made public comes from calculations made at the MPC.  With data from a single night, only the crudest of orbits can be determined.  Mostly, the initial discoverers have further nights scheduled at the telescope, or know of colleagues who have telescope time, so that additional observations of the body come about as a matter of course.  This usually is sufficient information to allow the MPC to generate a reasonable orbit and the discovery is announced, in general as part of the MPC Electronic Circular system.  In order to obtain a more reliable orbit, further observations, well separated in both space and time from the discovery observations are required.  For most bodies in the Solar System, these observations are obtained as part of other programmes, usually on a time scale of months, and this is perfectly adequate to allow the body to be permanently recorded.

The initial discoverers may, for a number of reasons, be unable to obtain additional observations themselves.  To aid the process of obtaining additional observations, the MPC produces a list that is generally available of objects that need further observations and are currently visible so that observers with telescope time can make a special effort to observe these objects, thus ensuring that the elements of the orbit are secure.  The Near Earth Objects are peculiar in that they are far easier to detect when close to the Earth and thus appear to move very fast against the background and, unless additional observations are obtained very quickly, the body may be lost.  In this event, the MPC may become pro-active and solicit observations from known observers, or release a preliminary orbit, with large error bars, so that other observers will know roughly where on the sky this particular object is so that they can conduct a search for it.  Sometimes it is found in archival records.

The problem that I alluded to in the first sentence appears when predictions for the future motion of the body, based on the rather poor initial orbit, indicate that collision with the Earth is a very remote possibility sometime in the distant future.  The dilemma is obvious.

If the rough orbit is not released, there is little chance of further observations being obtained.  If the orbit is released, it is inevitable that somebody will compute into the future and find that there is a small probability of an Earth collision.
The IAU Minor Planet Center is central to the process as it currently operates, and so it is not surprising that the press often state that "the IAU announces that an asteroid may hit the Earth in 20XX".

The scientific aspects of NEOs are actively pursued by Commissions 15 and 20.

A chronology of milestones of near-Earth asteroids is presented on: https://www.iau.org/public/nea/