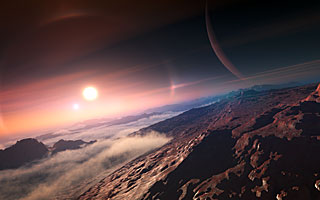 The IAU fully supports the involvement of the general public in the naming of astronomical objects, whether directly or through an independent organised vote, in the naming of planetary satellites, newly discovered exoplanets, and their host stars. This follows a well-established tradition for naming Solar System objects.

The IAU does not consider itself as having a monopoly on the naming of celestial objects — anyone can in theory adopt names the way they choose. However, given the publicity and emotional investment associated with these discoveries, worldwide recognition is important and the IAU offers its unique experience for the benefit of a successful public naming process (which must remain distinct, as in the past, from the scientific designation issues).

The scientific nomenclature for the designations of exoplanets usually consists of two elements: 1) a proper noun or abbreviation, sometimes with associated numbers 2) followed by a lowercase letter.

The first element can derive from a number of sources. A common source is an exoplanet's host star's widely recognized, common or astronomical catalogue name. Alternatively, exoplanets are often named after the scientific instrument or project that discovered the exoplanet.

We'll look at several examples of the first element of exoplanetary naming. 51 Pegasi b, for instance, is an exoplanet around the star 51 Pegasi in the constellation Pegasus. The star received this particular catalogue designation by English astronomer John Flamsteed in his 1712 star atlas. Another common star catalogue used for exoplanet names is GJ, from a 1970 expansion of German astronomer Wilhelm Gliese's 1957 index. (A handful of Gliese exoplanets also exist as well.) An example world with this naming is GJ 1214 b, meaning it is the 1,214th entry in the star catalogue. Still other examples include the HD and HIP exoplanets. An example of an exoplanet named after its star's common name is Fomalhaut b, derived from an Arabic name originally used at least 2,000 years ago.

Exoplanets have designations stemming from their discovering instrument include the Kepler planets, for the National Aeronautical and Space Administration's (NASA) Kepler space telescope. Another instance is the CoRoT planets, for the French Space Agency's (CNES) and the European Space Agency's (ESA) spacecraft, COnvection ROtation and planetary Transits. Example planets are Kepler-186 f and CoRoT-7b, respectively. The number in each name refers to the order of the exo-solar system's detection or identification in the instrument's data.

Exoplanets that are named after astronomical or planet-searching projects include the HAT planets, via the Hungarian Automated Telescope Network (HATNet), and the WASP planets, from the SuperWASP project, both of which are ground-based efforts. Numerous other examples exist. The nation of Qatar funds an exoplanet-hunting project, and its planets follow the naming scheme of Qatar-1b, and so on. The MOA and OGLE exoplanets were discovered through a particular observation technique, called gravitational microlensing, by the Microlensing Observations in Astrophysics (MOA) and the Optical Gravitational Lensing Experiment (OGLE) projects, respectively.

We'll now address the second letter element appearing in exoplanet scientific designations. Unlike the proper noun, the letter term applies universally in almost all nomenclature styles. The letter indicates the order of the planet's discovery around its host star. The first exoplanet discovered in another solar system is designated b; the second, c; the third d; and so on. The letter does not indicate the planet’s orbital placement around its host star, so Exoplanet-c can be closer to, or farther away from, the star that it co-orbits with Exoplanet-b.

The lowercase lettering style is drawn from the IAU-established rules for naming binary and multiple star systems. A primary star, which is brighter and typically bigger than its secondary or tertiary companion stars, is designated by a capitalized A. Its companions are labelled B and C, and so on. Sirius, the brightest star in the sky, demonstrates this nomenclature. Actually a double star, the bright star we see in Canis Major is Sirius A, and its dim companion is Sirius B. The first exoplanet tentatively identified around the second brightest star in the triple star system, Alpha Centauri, is accordingly called Alpha Centauri Bb. If an exoplanet orbits both of the stars in a binary system, its designation can be, for example, Kepler-34(AB) b.

The public names proposed in naming campaigns should follow the naming rules and restrictions adopted for Minor Bodies of the Solar System, by the IAU and by the Minor Planet Center (see https://www.iau.org/public/naming/#minorplanets, or, for more details, http://www.minorplanetcenter.net/iau/info/Astrometry.html#nametype).

In particular proposed names should be:

In addition it is not allowed to propose:

The process must be respectful of intellectual property:

It is understood that, if a scientific designation for the object(s) already exists, the public name will not replace it, but will be recognized by the IAU as the appropriate publicly used name for the object(s), and be publicized as such, along with due credit to the organization or individual that proposed it. This public name may then be used internationally along with, or instead of, the scientific designation, permanently and without restrictions.

(*) Note: These names are modified based on the original proposals, to be consistent with the IAU rules.

Note 1: The original name proposed, "Veritas", is that of an asteroid important for the study of the solar system.

Note 2: The name originally proposed, Amaterasu, is already used for an asteroid.

Note 3: Note the typographical difference between "AEgir" and "Aegir", the Norwegian transliteration. The same name, with the spelling "Aegir", has been attributed to one of Saturn's satellites, discovered in 2004.

Note 4: "Ogmios" is a name already attributed to an asteroid.

Note 6: The original spelling of "Lippershey" was corrected to "Lipperhey" on 15.01.2016. The commonly seen spelling "Lippershey" (with an "s") results in fact from a typographical error dating back from 1831, thus should be avoided.