What is an astronomer? 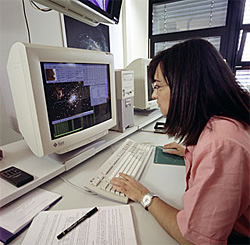 When you look up into the sky at night you see the stars as pretty twinkling lights. An astronomer admires the beauty of the stars and other celestial objects and wants to learn what they are and how they work. An astronomer is a scientist who tries to understand and interpret the Universe beyond Earth and the Earth within the Universe. Using observational tools like space and ground-based observatories, computers  and the good old paper and pencil, astronomers attempt to build up a picture, not only of what the Universe is like today, but what it was like billions of years ago, right back to the “Big Bang”. To do this Astronomers have to understand the behaviour of matter in conditions that simply do not exist on Earth, whether at extreme temperatures or involving exotic objects and particles. They must use whatever kind of light, from radio to gamma rays, and particles (from cosmic rays to neutrinos) make it to Earth, along with sophisticated computers to piece together what happens beyond our planet. Observational astronomers might look for new planets, try to understand stars, galaxies, black holes, and other phenomena, or try to map the entire sky. More theoretical researchers might measure magnetic fields or simulate the structural build-up of the stars, figure out how galaxies formed and how the expansion of the Universe evolved. To summarise, they build models of the Universe from fundamental physics and endeavour to make it understandable.

What does it take to be an astronomer?

Astronomy is a great challenge. That’s why curiosity and a motivation to know and understand more and more are so important for prospective astronomers. They try to answer such questions as: How did the stars and planets form? Why does the night sky look the way it does? How did the Universe get here and when will it end? Once they ask those questions, astronomers have to combine rigorous logic with leaps of intuition to try and answer them. A good background in maths, physics, chemistry and computer science is required to be a modern astronomer — this means a scientific high school curriculum followed by earning a physics or maths or engineering university degree and a PhD in astronomy or astrophysics.

What’s the career path of an astronomer?

After getting a PhD, astronomers usually spend three to six years in one or more postdoctoral positions in universities or research institutions. Afterwards, astronomers look for steady positions as researchers or group leaders either in a university department, national facility, or government research centre. Eventually astronomers are granted university tenure, a permanent position where they generally work for the rest of their career.  Astronomy is a small field, but very popular. Only those with a strong education, ability and a deep passion for the subject are likely to find a permanent position. However, training as an astronomer can open doors in many related fields including other research areas, industrial research, commercial or industrial enterprises, education, public relations and outreach.

Things to keep in mind when preparing for astronomy career

Make sure your communication skills are excellent. You will be expected to write numerous scholarly articles during your academic career. You might also need to write grant proposals and proposals for observing time to the different observatories. And remember that, as with most scientific disciplines nowadays, astronomy requires involvement in international collaborations, so good English communication skills are essential. Remember that many astronomers also work as university lecturers and professors, so teaching skills and knowing how to interact with students is important. Especially early on, be prepared for the possibility of spending long night-time hours in observatories and travelling a lot for conferences, meetings and observation runs.  If you’re motivated enough, all the preparation will seem worthwhile as you start to uncover the secrets of the Universe in your career as an astronomer.