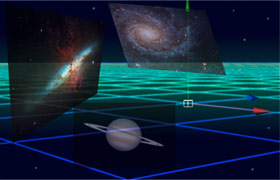 How do you know where you are now? How do we know where we are in space? How does the International Space Station or the latest space probe keep track of its location in the Universe? The best answer would be – with great difficulty! Ever since the earliest philosophers first considered our place in the Universe, it has always been a natural first step to define our position in the overall order and structure of the cosmos.

One of the earliest Greek philosophers, Heraclitus, is often credited with advancing the concept of “everything changes or panta rhei”; a philosophy that develops the notion that the Universe is continually in motion, like a river. If we consider the Earth, the Solar System and the Universe as a whole, from the ground beneath our feet to some of the largest objects in the Universe, nothing is, in fact, immobile. On Earth the tectonic plates under our feet are moving, albeit slowly!  And when we look out beyond the Earth, there is still no absolute reference point. The Earth rotates at half a kilometre a second at the equator, and is moving around the Sun at 29 kilometres a second; our Sun is also moving through space at about 19 kilometres each second and is orbiting the centre of the Milky Way (our galaxy) at about 215 kilometres a second. Stepping up a scale, the Milky Way is moving towards the Virgo Cluster, which is also in motion. As an added complication, the continuing expansion of the Universe must be included in large-scale distance measurements. The light we see today arriving from distant objects has taken so long to reach us that the Universe has expanded in the travel time of the light. So the task of defining a single reference frame from which the location of any other object in space can be defined is particularly complex. Traditionally this has required very precise measurements of the positions of many reference stars, with a catalogue of their motion across the sky through the year, referenced to their position at a particular precise date and time.

The International Astronomical Union (IAU) is responsible for defining a Universal Frame of Reference. This work touches on many aspects of our daily lives, so much so, that without a standard reference frame many of our modern gadgets would, at best, be incompatible with each other and, at worst, inaccurate or not fit for purpose.

Many people nowadays use the Global Positioning System (GPS) in their everyday lives. GPS requires several aspects of the Universal Frame of Reference to be defined. For example, the systems that controlled the launches of the GPS satellites had to have an excellent understanding of the positions of the stars, orbital elements and the definitions of various units in order to position the satellite in the correct orbit needed to complete the “constellation” of satellites. The IAU Commission A1 (Astrometry) and Commission X2 (Solar-System Ephemerides) provide valuable information about “physical position” and “position in time” respectively, mainly to astronomers and space scientists. Astronomers also need to have accurate definitions for concepts such as the celestial equator — the imaginary line on the sky above the equator on Earth — and the ecliptic — the path of the Sun across the sky — as some earlier reference frames were based on these.

However, much more than basic positional input needs to be considered to establish a Universal Frame of Reference. Scientists have to agree on definitions for certain key reference units or parameters. These topics are covered by other IAU Commissions, including Commission 31 (Time ). In the context of the Universal Frame of Reference the work of Division A WG Time Metrology Standards is also closely linked with Commission A2 Rotation of the Earth, as knowledge of the Earth's ever-changing orientation in space is necessary to link terrestrial and celestial frames. The Earth is not fixed, nor in moving in a way that is simply described, so much work goes into measuring and defining this complex movement. Phenomena such as precession, the slow, roughly 25 000 year cycle, of movement of the direction of the Earth’s axis, and nutation, the continual “nodding” of the Earth’s axis, due mainly to tidal forces from the Sun and Moon, all have to be taken into account when defining a Universal Reference Frame.

In 1997 and 1998 the IAU, in collaboration with the International Earth Rotation and Reference Systems Service (IERS) and the International Very Long Baseline Interferometry Service (IVS)International Celestial ReferenceFrame(ICRF). The ICRF uses the relative positions of 212 extragalactic radio sources to establish an origin for the system at the centre of mass of the Solar System, and coordinate axes that are aligned with the conventional axes of the celestial equator and equinox ( the point at which the Sun crosses the equatorial plane moving from south to north ) of the epoch J2000.0 (1200 hours Terrestrial Time on 1 January 2000), but are obtained in a way that is independent of the dynamics of the Earth’s rotation . On 20 August 1997, at the 23rd IAU General Assembly in Kyoto, Japan, the IAU adopted the ICRF, and the celestial equator and the ecliptic were no longer central in establishing a celestial or Universal Reference Frame.

In recent years more precise measurements have allowed the ICRF to be refined, allowing for a much more accurate system. At the IAU General Assembly in 2003 the IAU Working Group (WG) on the ICRF was dissolved and its work was then covered by the main Reference Frame Working Groups: Commission 8, Densification of the Optical Reference Frame and  Division 1, Second Realization of International Celestial Reference Frame. On 24 August 2006, at the IAU General Assembly in Prague, new resolutions were adopted that aim to improve our definition of the Universal Frame of Reference. The Division A WG Third Realisation of International Celestial Reference Frame is currently working on this topic.