The votes are in — the names of 19 ExoWorlds (14 stars and 31 exoplanets orbiting them) have been chosen by public vote in the NameExoWorlds contest, and accepted by the IAU. Reflecting the truly international interest in astronomy, over half a million votes from 182 countries and territories contributed to the new official designations of the alien worlds.

Although people have been naming celestial objects for millennia, the International Astronomical Union (IAU) is the authority responsible for assigning official names to celestial bodies. The NameExoWorlds contest provided the first opportunity for the public to name exoplanets, and their stars. The winning names are to be used freely in parallel with the existing scientific nomenclature, with due credit to the clubs or organisations that proposed them.

With voting concluding on 31 October 2015, a total of 573 242 votes from the public have contributed to the naming of 31 exoplanets and 14 host stars. Proposers of the winning names are to be awarded a plaque commemorating their contribution to astronomy and they will be given the exciting opportunity to name a minor planet.

The public voted on the 247 proposed ExoWorld names submitted by a wide variety of astronomy organisations from 45 countries all over the world (iau1511) — these included amateur astronomy groups, schools, universities and planetariums. The successful entries were received from across the globe — four were received from North America (USA, Canada), one from Latin America and the Caribbean (Mexico), two from the Middle East & Africa (Morocco, Syria), six from Europe (France, Italy, Netherlands, Spain, Switzerland), and six from Asia–Pacific (Australia, Japan, Thailand).

The IAU Executive Committee Working Group on the Public Naming of Planets and Planetary Satellites validated all the individual cases of the winning names from the vote, as stipulated in the guidelines, and made appropriate modifications to the original proposals where necessary, in full agreement with the proposers.

However, after extensive deliberation, the Committee decided to annul the vote for one particular ExoWorld — tau Boötis — as the winning name was judged not to conform with the IAU rules for naming exoplanets. To this end, the IAU will organise a new contest to decide the name of tau Boötis in the future.

The newly adopted names take the form of different mythological figures from a wide variety of cultures from across history, as well as famous scientists, fictional characters, ancient cities and words selected from bygone languages:

The complete list of the results, including vote counts, proposers, and citations is published on the IAU NameExoWorlds website.

Note: The spelling of Lippershey was corrected to Lipperhey on 15.01.2016.

The IAU is the international astronomical organisation that brings together more than 12 000 professional astronomers from almost 100 countries. Its mission is to promote and safeguard the science of astronomy in all its aspects through international cooperation. The IAU also serves as the internationally recognised authority for assigning designations to celestial bodies and the surface features on them. Founded in 1919, the IAU is the world's largest professional body for astronomers. 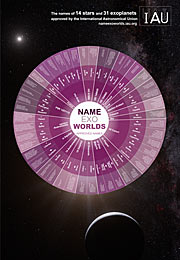