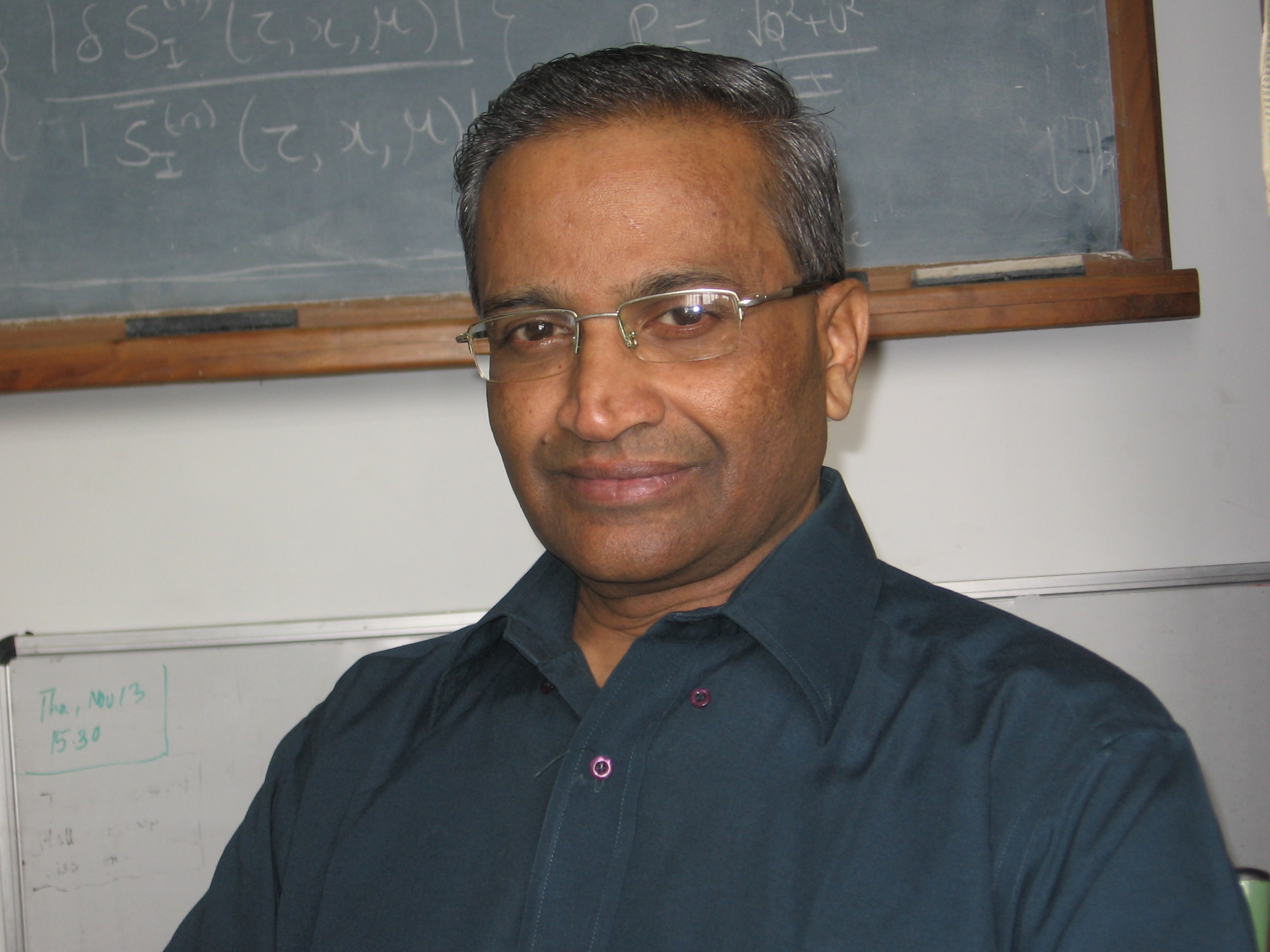 The eminent Indian theoretical astrophysicist K.N. Nagendra unexpectedly passed away on 6 March 2020 due to cardiac arrest. He was one of the main contributors to the advancement of the field of solar polarization with his many profound contributions to the theory of polarized radiative transfer. He built up a group of brilliant young students, who now have become established scientists in different parts of the world. Besides this legacy, he stood out with his unparalleled work ethics, dedication to science, and integrity.

Nagendra was born in a village named Kanakatte in the state of Karnataka, India, on 3 July 1955. He graduated from the University of Mysore and completed his PhD at the Bangalore University in 1986 with the thesis titled "Radiative Transfer With Stokes Vectors". He has been on the scientific staff of the Indian Institute of Astrophysics in Bangalore since 1985. During this time he also held various visiting scientist positions in the US, France, and Switzerland. After his official retirement as Senior Professor in 2015 he continued his scientific work and collaborations with undiminished intensity.

Throughout his research career Nagendra systematically developed the theory and numerical techniques to calculate the formation of polarized line profiles in magnetized astrophysical media, accounting for scattering, Hanle and Zeeman effects, Paschen-Back effect, partial frequency redistribution, quantum interferences between various kinds of atomic levels, etc. He developed collaborations with observational programs to apply his theory to realistic model atmospheres for comparison with observations, in particular of the various spectral features that are observed in the Second Solar Spectrum. Furthermore he developed super fast iterative numerical methods to address multi-D polarized transfer problems, and contributed to the development of comoving frame techniques to solve radiative transfer problems in non-planar geometry.

Besides science Nagendra pursued interests in Indian classical music and philosophy. Many of us consider him as one of the kindest, sincere, devoted, and hard-working scientists we have ever known. He is survived by his mother-in-law, wife, daughter, son, and four grandchildren. While he will be deeply missed, his kindness and uncompromising devotion to the scientific enterprise will endure as an inspiration to all who have had the privilege of having known him as a mentor, friend, or collaborator.

Writing an obituary is a painful thing when you are close associate of a person. However, it gives a great relief to the hearts while recalling the sweet memories in one’s association. Fondly known as KNN, Prof K. N. Nagendra was gem of a person who stole the hearts of every one during his career at IIA. In this obituary I touch upon general aspects of his distinguishing qualities as an individual noticed during our association at IIA.

In 1978 there were three students one among them was KNN joined Indian Institute of Astrophysics (IIA) for doing Ph.D under the guidance of Prof A. Peraiah who was well known theoretical astrophysicist. Initial stages KNN had very tough time due to his father’s illness and unable to concentrate on his research work properly.

Office accommodation during that period:

In the institute more than 12 people used to share office space in a hall including KNN and he never used to participate in any of general discussions even during leisure hours. One of his college mate told me that during his post-graduation time, he never used to waste time and always thinking of physics problems and its solutions. It shows his dedication, passion and interest towards his studies.

Topics of Radiative Transfer in stellar atmospheres put us on to the same desk and we moved together for many years. We stayed together in a guest house at Kodaikanal while on official duty for explaining astronomy to the public, popularly known as museum work. During 1980's IIA didn't have large computing facilities in the campus that made us to travel to Indian Institute of technology (IIT) Madras (presently called Chennai), Indian Institute of Science (IISC, Bangalore) and Kavalur which is our field station for our computational work. KNN wants to stay nearby to the institute in order to spend more time on his research work in the institute. It also help avoid long distance travel to his residence onday-to-day basis. Our house construction work was near simultaneous during the year 1988 that brought us much closer and developed strong affinity while discussing aspects of house construction. It was new field all together for both of us and that made us share views over long leisure hours. As soon as he completed basic planning of his house work, he left to USA for his postdoc and his wife started supervising it. KNN was quite concerned about friends and colleagues career progress and in the process he used to enquire about my Ph. D program.He was quite happy when I registered for my doctoral work under the guidance of Prof A. Peraiah and he used to drag on me towards completion.

KNN and myself attended "Stellar atmosphere modelling” conference in Tubengen in 2002, Germany. We used to walk to the conference hall from the hotel accommodation. One of the days, we could meet Prof Dimitri Mihalas and discussed various radiative transfer problems in stellar atmospheres and general issues about research facilities in India. Prof Mihalas was also enquiring about Prof A. Peraiah and his book on "An introduction to Radiative transfer-Methods and applications in astrophysics”.

After obtaining his Ph.D. in 1986 from Bangalore University, KNN went to post-doctoral fellowship 1989-1991 at Rensselaer polytechnic, Troy, New York, worked with Prof C. M. Leung on transfer problems in stellar atmosphere. On his return from USA, KNN started guiding students on the topics of polarization, which is his favorite field of research. He used to take students on a continued basis and never compromised on the duration of their research and urged them to submit thesis on time. Further, he was very successful in steering them towards suitable placements in different institutions. Following were his students guided by him.

Apart from above mentioned students he also guided many Master degree students on short-term projects.

KNN has full support from his wife Mrs Vimala even while he was research student. They were made for each other. Used to share every aspect of their responsibilities and shaped the family into an Earthly heaven. Due to his family support, KNN could travel many countries and stayed outside for working long periods. KNN continued to live in a simple, humble and traditional manner and respected his motherland from the bottom of his heart. Even he brought up his children also in a traditional way. He is a very good counselor for teenage boys which is a hidden talent.

He had never missed out attending family functions that remained testimony to his societal attachments. The persons who moved closely with him never forget his association. The last time I met him 11, March 2018, which was my son’s wedding day. After my retirement, we used to communicate each other over phones for exchanging of views.

He was interested in music.We both are members in Nadasurabhi Cultural association in Koramangala, Bangalore. We attended many music concerts during that time. Most of the times he used to listen Hindu Vedic chanting and circulates it among his (I still listen those Vedic) close friends. He was also interested in Yoga and listening to classical music.

He is member of international astronomical union (IAU). He was elected member of Commission 36, on stellar atmospheres of the IAU for two consecutive periods, 2003-2006, 2006-2009).

KNN had more than 100 publications to his credit with good citation index and had international collaborations. He was a frequent visitor to Nice, France, and collaborated with Prof Helene Frisch and Prof M. Faurobert. He worked with Andrzej zdziarski of Copernicus astronomical center Warsaw on Compton scattering problems in AGN's. He also worked with J.O. Stenflo of Zurich on the effects of multilevel coupling on the polarized response lines in realistic atmospheric models of Sun. KNN and Prof Stenflo edited the proceedings of the International workshop on solar polarization held at Pulkovo Observatory in St. Petersburg in 1995.In addition,KNN edited series of books on solarpolarization, which are proceedings of international conferences.

We worked together on polarization effects of close binary systems and we want to compute the emission line profiles of the K1 line formed in the CSE of N- type star RScl and compare with the onservations of Gustafsson et. al; (1996, A&A, 318, 535) both the proposals could not progress much due to his busy schedule.

KNN married when he was a research student and his wife was employed in a bank. She plays musical instrument called Veena and continues to learn Sanskirt. The couple were blessed with two children namely Sumana and AAditya. KNN and Mrs KNN has four grandchildren. KNN was interested in leading a very simple life. At IIA he was elevated to higher positions as a result of his hard work. He was a group committee Chairman for theoretical astrophysics group.

His attempts to write a book on polarization went in vain due to his sudden demise. I wish his students and collaborators may bring out summary of his scientific contributions which may full fill his ambition for some extent.

I apologize to scientific community and KNN family members for not including many of his achievements.

May his soul rest in peace.