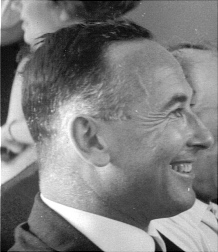 Émile-Jacques Blum was one of the last survivors of the first generation of radioastronomers, those who were trained as electronic engineers or physicists rather than astronomers.

Blum was born on 27 July 1923 at Floing (Ardennes, France). He was studying physics, and in particular electronics, in Toulouse when WW2 was declared. He fled France with his father in 1943 to reach North Africa, where he volunteered as a transmission officer in Forces françaises libres, the dissident army which helped the English and the Americans to fight the Nazis in Italy, then in France and Germany.

After finishing his studies in Paris in 1947, Blum obtained a position as an engineer in the Navy, thanks to Yves Rocard, the Director of the Physics laboratory of École normale supérieure. In 1949, he joined the radioastronomy group in this laboratory just created by Jean-François Denisse and Jean-Louis Steinberg. His contribution was essential, as he was the only one in the group with a deep knowledge of electronics. He obtained a PhD in 1952, based on radio observations of a total eclipse of the Sun in Niger. Two years later, the group moved to the Paris-Meudon Observatory, where he obtained a position as an assistant, then as an astronomer in 1955. It was the time of the creation of the Nançay radioastronomy station, in which he played a major role. He built the first large instrument there: the East-West solar interferometer working at 178 MHz, completed in 1956, to which he added a North-South branch in 1961. This instrument is still in operation after various improvements. At the time of its construction, it was the largest of its kind in the world and contained two remarkable innovations: a preamplifier at each antenna and analog correlators to combine the signals of the different antennas.

During the construction of the large radiotelescope at Nançay, Blum built several receivers for it together with Émile le Roux and two young scientists, in particular the first line receiver in France. In 1964, he took the directorship of the Nançay station. Already at this time, he was interested in millimetre wavelengths and promoted the construction at the Bordeaux Observatory of an 8-mm two-antennas prototype interferometer, started in 1967 and operational in 1973. In 1967-68, Blum spent six months at NRAO in Charlottesville to get acquainted with millimetre techniques. Returning to France, he set up a millimetre radioastronomy laboratory in Meudon and started a fight for getting money to build a large millimetre interferometer.

In Germany, Peter Mezger, who Blum knew very well since they both stayed in Charlottesville at the same time, had the project of building a large millimetre single dish. After long and difficult negotiations for which Blum and Mezger were the radioastronomers most involved, the French and the German projects eventually merged in 1979 into the French-German-Spanish Institute for Radioastronomy at Millimeter wavelengths (IRAM); Spain joined IRAM the following year (Blum lead the negotiations for this). IRAM has two instruments, an interferometer at Plateau de Bure (Hautes Alpes, France) and a 30-m radiotelescope in the Sierra Nevada near Granada in Spain, while the institute itself is in Grenoble. Blum moved to Grenoble in 1980, and worked on front ends and cryogenic systems for the IRAM receivers until his retirement in 1985. Then he occasionally shared the work at IRAM as a consultant. The success of IRAM, which is the most powerful millimetre radioastronomy institute worldwide aside ALMA, is based to a very large extent upon Blum’s foresight, enthusiasm, stubbornness and diplomatic skills.

Blum’s publication list is short, something not unexpected for someone who was basically conceiving and building instrumentation; but several of his papers describe novel and important principles. All his collaborators have been impressed not only by his qualities as a scientist, but also by his qualities as a man. His kindness, his unpretentiousness, his perfect honesty and his humour hid an iron will and perseverance. Together with his remarkable technical gifts and knowledge and with his imagination, these qualities were the reasons for the success of all his undertakings. Several of his colleagues, including myself, were tied to him by a deep and lasting friendship.