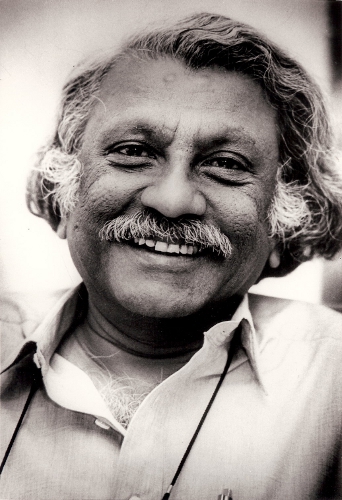 V. Radhakrishnan, or Rad, as he was widely known, was born on 18 May 1929. He grew up in Bangalore, taking a BSc. in physics at the Central College of the Mysore University - his only degree until he received an honorary doctorate from the University of Amsterdam in 1996. His early fascination for radios and motorcycles grew into a lifelong love and deep understanding of all kinds of gadgets and machines.

Travelling widely from his early twenties, Rad joined the radio astronomy group at the Onsala observatory of the Chalmers Institute of Technology in 1955. The 21 cm line and fluent Swedish stayed with him all his life. The next stop, in 1958, was the Caltech Owens Valley Radio Observatory where his basic work on polarized interferometry revealed the magnetic field of Jupiter and the rotation of its interior. This period also saw early work on combining emission and absorption of atomic hydrogen in the Galaxy to infer the spin temperature and optical depth. This grew to a major program at the Parkes observatory of the CSIRO Division of Radiophysics (which he joined by sailing a 35 foot trimaran – the Cygnus A – across the Atlantic and Pacific in 1964-65!). The detailed account of this work filled an entire volume of the Astrophysical Journal Supplement, and formed a strong observational underpinning for the idea of a multiphase interstellar medium. Both at Owens Valley and Parkes, numerous talented collaborators also participated.

A classic paper measuring the polarization swing of the Vela pulsar, gave birth to the widely used magnetic pole model for pulsar radio emission. Rad always ensured full credit to his many collaborators, including the people who joined him in building the instruments that made the science possible. In 1972 he accepted an invitation from the Raman Research Institute (RRI) Trust to return to India and head the RRI. Under his leadership, the institute grew to establish successful programs in radio astronomy and different branches of physics. He assembled, trained, and inspired a group which undertook many projects over more than three decades. These included the construction and use of a millimeter-wave dish and receivers, and major collaborations with the Indian Institute of Astrophysics in building and using two low frequency radio observatories at Gauribidanur and Mauritius. Rad enjoyed a very special relationship with the radio astronomy group of the Tata Institute of Fundamental Research, and strongly supported its Giant Metrewave Radio Telescope project in kind, with some critical front ends and back ends being built at RRI. For this project, not a single scrap of paper was signed, a unique example of placing the science over any narrow institutional considerations. With his students and colleagues, he worked on many aspects of pulsars and the interstellar medium. By personal example, searching questioning, and intense discussion, he strove to build a unique atmosphere in which theory, experiment, instrumentation and observation were not separated but pervaded by a common spirit. Astronomers all over the world held him in high regard and responded readily to his invitation to visit the Raman Institute.

He delivered an Invited Discourse on pulsars at the 1985 IAU General assembly, the 1987 Oxford University Milne Lecture, and the 2000 NRAO Jansky lecture. Rad was elected a Foreign Associate of the US National Academy of Sciences and a Foreign member of the Royal Swedish Academy. He served on advisory boards of major observatories in Australia, the Netherlands, and the US, as President of the URSI Commission on Radio Astronomy (1981-83), and as a Vice-President (1989-91) of the IAU.

Starting from the 1990's, Rad took up building and flying microlight aircraft. In his last decade, he went back to the sea, building a twin-hulled sailboat of his own novel design. Well after his eightieth birthday, he sailed it to Oman, then back westwards to Malaysia, and had every intention of going all the way round the world.