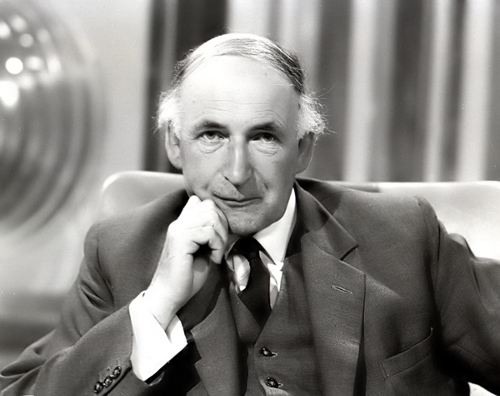 Alfred Charles Bernard Lovell was born on 31st August 1913 in the village of Oldland Common near Bristol. He lived his first years among the green fields of Gloucestershire, attending the local village school. He was more interested in cricket and music than school studies, interests which were abiding until his death. His father, a lay preacher, however, nurtured in Bernard a high ability in written and spoken English. Bernard also had an interest in radio, building increasingly sophisticated wireless sets as components became available. His ability at school work was not outstanding, but a school trip at the age of 15 to a lecture at Bristol University by Prof. A. M. Tyndall on the electric spark inspired him. His grades improved rapidly, particularly on mathematics and science, obtaining good results in his Higher School Certificate and a scholarship in 1931 to attend the honours physics course at the H. H. Wills laboratory under Tyndall at the University of Bristol.

He obtained first class honours in physics in 1934, and proceeded to a PhD course. His research was on the properties of thin metallic films, his work preceding the discovery of the quantum Hall effect. He submitted his thesis in 1936, and applied for positions under Prof. W. L. Bragg at Manchester and Prof. P. M. S. Blackett at Imperial College. He was accepted at Manchester and was appointed as Assistant Lecturer in Physics in September 1936, continuing his work on thin films, though he had much preferred to work with Blackett on cosmic rays. As it happened, Blackett was appointed to the Langworthy Chair at Manchester late in 1937, and so a new era was born. Lovell designed the magnet for a cloud chamber, published papers on the newly discovered mesons with D. R. Hartree, L. Jánossy and J. G. Wilson, and in the meantime learnt from Blackett how to combine the skills of organisation and administration with an element of ruthlessness in order to make progress.

At the beginning of August 1939 he was about to take a vanload of equipment across France to the Pic Du Midi observatory in the Pyrenees when Blackett advised him not to go because of the situation on the continent. Later in August, on the recommendation of Blackett, Lovell with others from Manchester attended a course on Radar at Bawdsey Manor. He was then posted for 6 weeks to Staxton Wold near Scarborough, one of the Home Chain radar stations which were to play such an important part in the Battle of Britain in 1940. Later postings in 1939 were to Perth, Scotland to work on airborne radar and then St Athan, Wales. During the cold winter of 1939-1940 a Hudson aircraft carrying anti-submarine equipment (ASV) crashed, killing two of the Manchester colleagues who had accompanied Lovell to Bawdsey. This badly affected him (as realised by Blackett), however work on Radar continued, now under the auspices of the Telecommunications Research Establishment. It was during this time that Lovell suggested to Blackett that it might be possible to detect the ionisation trail left behind by a high energy cosmic ray shower with radar. Blackett encouraged Lovell to work on the calculations (even though he was already working long hours on developing radar) and a paper was duly published in Proc. Roy. Soc. in 1941. Later Lovell worked extensively on the H2S radar system fitted to aircraft of Bomber Command and on ASV. He was awarded for his efforts during the war with an Order of the British Empire in 1946. He was most proud of the work on ASV, since this led directly to a reduction in attacks on allied shipping in the North Atlantic.

After the war, rather than continuing with work of a military nature, Lovell decided to go back to his research on cosmic rays at Manchester. This involved a considerable cut in salary, and instead of being head of a large group of around 100 highly technical personnel (at the age of 32!) he was now just a lecturer in physics, with just the odd student and technician to command. He wanted to pursue the ideas that interested him in 1940 and so with the aid of ex-War Department radar equipment set up an experiment in the quadrangle of the University to look for echoes from cosmic ray showers. Unfortunately radio frequency interference (RFI) from the electric trams rendered reception impossible. Lovell persuaded Blackett and the University to let him use a field at Jodrell Bank, out in the Cheshire countryside and used by the Botany department for experiments on plant growth. The equipment came out in mid- December 1945; a trailer from Park Royal in London got stuck in the mud (the pond near the present Mk2 Telescope is called Park Royal Pond in memory of this event); however echoes were soon detected. Early in 1946 the echoes were found to be from trails left behind by meteors, and so a new research area was born. To this date cosmic ray showers have not been detected by radar techniques, though radio emission from the shower front itself has been detected and now used as standard technique for studying cosmic rays. Lovell and Blackett had overestimated the strength of the echoes, mainly due to the rapidity with which electrons are captured by air molecules in the lower atmosphere thus damping the echo, an effect unknown at the time.

Extensive work on meteors, radar detections of the moon and the Aurora Borealis followed, with the grounds at Jodrell Bank being covered in aerial arrays with high power radar systems in huts dotted around. Much of the equipment was ex-WD, and it was the job of a research student to recycle any components he could find from piles of electronics stored in wooden huts. Most equipment was made on site, as commercial radars were very expensive. What was needed was a more sensitive detector, and so a 218-ft diameter parabolic reflector pointing at the zenith was made using wire ropes, angle iron and chicken wire. Again cosmic rays were not detected, however surveys of the sky revealed a number of discrete radio sources, including HB9 - the Andromeda Galaxy. Discoveries continued as radio astronomy developed: in recognition Lovell was appointed by the University to the first chair of radio astronomy in 1951 and elected a Fellow of the Royal Society in 1955.

It was soon realised that the 218 ft telescope was limited in what it could do – a similar diameter dish was needed which could be pointed to any part of the sky. And so in 1957 after much effort the Mk1 250-ft diameter telescope was complete. Design changes following the discovery of the 21-cm Hydrogen line and the need for deep piles to secure the foundations led to considerable cost overrun, which could have resulted in a disastrous court case. However thanks to the unique ability of the telescope to track the rocket launcher of the Sputnik satellite, its use for communications with Pioneer V and the generosity of Lord Nuffield the matter was eventually resolved. Jodrell Bank continued to make discoveries, using both passive now conventional radio astronomy techniques as well as radar, and included many firsts in space tracking. The first digitally controlled telescope, the Mk2 - 25m by 39 m, was built in 1966. Sir Bernard was one of the first to realise the importance of the study of compact radio sources. He formed a long baseline interferometer group whose results led to the discovery of quasars, which are now known to play an important part in cosmology and the evolution of the universe.

Contact with the public had always been a priority with Lovell: Jodrell Bank being one of the first scientific institutions in the UK to arrange special facilities for visiting members of the public. In 1958 Lovell gave the Reith Lectures for the BBC. In recognition for his achievements Bernard Lovell was awarded the Royal Medal of the Royal Society in 1960 and knighted in 1961.

In 1965 he was one of the original members of the UK’s Science Research Council and Chairman of the Astronomy and Space and Radio Board until 1970. He was president of the Royal Astronomical Society from 1969 until 1971. His group at Jodrell Bank grew under his leadership, the MERLIN telescope array was one of the last projects developed under Sir Bernard’s direction. Sir Bernard retired from the post of director in 1981 and was awarded the Gold Medal of the RAS in that year. The 250-ft (76-m) telescope was renamed the Lovell Telescope in his honour during the 30th anniversary celebration in 1987.

Retirement didn’t stop Sir Bernard from working: he regularly came in to Jodrell Bank to work on correspondence and his memoirs until a year or so before his death on August 6, 2012.

Sir Bernard was formidable in committee, hard to convince of the worth of a project but would back his staff to the hilt once he was persuaded. He took a close interest in the progress of postgraduate students, leading regular 6-monthly interview panels which were daunting for the students but even worse for the staff if there were delays or problems. It was noticeable how well-sheltered staff were from the financial problems which continually beset the group, his efforts in securing funds from funding bodies and the University were amazingly successful.