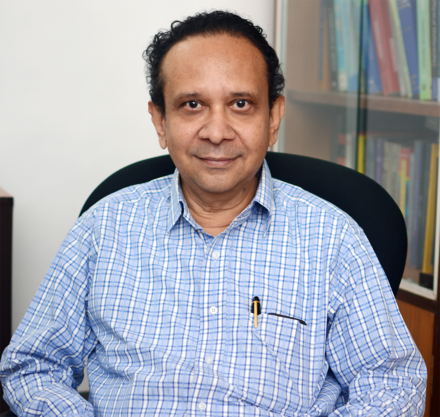 Professor Thanu Padmanabhan, known affectionately as Paddy, passed away on September
17, 2021, at the Inter-University Centre for Astronomy and Astrophysics (IUCAA), Pune, India.
He had joined the Tata Institute of Fundamental Research, Mumbai, India, as a faculty member
in 1980, before moving to IUCAA in 1992, where he stayed till his untimely demise.

In his illustrious career spanning more than four decades, Paddy contributed significantly to a
broad spectrum of topics related to astrophysics, cosmology and classical and quantum aspects
of gravitation. His research during the early days was aimed at exploring the implications of the
quantization of the conformal degree of freedom of spacetime, which led to interesting results
such as the avoidance of singularities and the nature of spacetime at short distances.

Subsequently, he investigated the manner in which semiclassical gravity can be arrived at from
a complete quantum theory and examined its domain of validity. Within semiclassical gravity, he
examined the phenomena of vacuum polarization and particle production in different situations,
including non-trivial effects that arise during the inflationary epoch in the early universe and
around black holes. Simultaneously, he studied the formation of large scale structure in the
universe utilizing semi-analytic methods as well extensive numerical simulations. Around the
turn of the century, with the advent of precision cosmology, he worked on understanding the
observational evidence for the cosmological constant as well as its possible nature and origin.
During the last decade-and-a-half, motivated by the thermodynamic nature of gravity, he was
developing an approach to the emergent gravity paradigm and exploring its ramifications. Paddy
was fascinated by the cosmological constant and, in fact, one of his recent aims was to
understand the microscopic nature of the cosmological constant in the context of the emergent
gravity paradigm.

An important and distinguishing feature of Paddy’s career has been his conscious effort towards
writing textbooks aimed at students at different levels. He has also authored many popular
science articles and books which have motivated students to pursue research in physics. We
believe that his articles, books and lectures will continue to inspire generations of students and
researchers to take up the challenge of understanding the laws of nature.

During his career, Paddy received numerous awards both at the national and the international
levels, including the INSA Young Scientist Award (in 1984), the Shanti Swarup Bhatnagar Award
(in 1996), the Millennium Medal (in 2000), the Al-Khwarizmi International Award (in 2002), the
Miegunyah Award of the Melbourne University (in 2004), the Padma Shri (in 2007), the
Inaugural Infosys Prize in Physical Sciences (in 2009) and the Third World Academy of
Sciences Prize in Physics (in 2011). Very recently, he was conferred the Lifetime Achievement
Award (Kerala Sasthra Puraskaram) of the Government of Kerala (in 2021). Notably, he also
won the First Prize in the Gravity Essay Contest (in 2008) awarded by the Gravity Research
Foundation, USA. He was a Fellow of all the three Science Academies in India as well as the
Third World Academy of Sciences.

Paddy was a guiding light for all of his students and postdoctoral fellows who have interacted
with him. The light having gone out has filled us with insurmountable grief and sorrow. Paddy
was a father figure and a close friend to all of us. His sudden demise leaves a deep void behind.
He will remain in our memories forever.