The IAU, together with partner organisations, has submitted a new Working Paper to the United Nations Committee on the Peaceful Uses of Outer Space (COPUOS), seeking to protect dark and quiet skies from interference by human activities. The paper was accepted for discussion at the opening of the 59th session of the COPUOS Scientific and Technical Subcommittee (STSC) — the first time that the issue of dark and quiet skies has been tabled as a formal agenda item by the UN. Co-signed by the European Southern Observatory (ESO) and the Square Kilometre Array Observatory (SKAO), the paper has been endorsed by Austria, Chile, the Dominican Republic, Slovakia and Spain. One of the main outcomes of this work is that UN COPUOS have decided to keep dark and quiet skies on the agenda for the 2023 STSC meeting.

As well as being a natural source of wonder, the pristine night sky has long been a stimulus to scientific exploration and discovery, and an invaluable aspect of humanity’s shared cultural heritage. As the prevalence of artificial light has increased, however, the visibility of the night sky has been greatly reduced around the world. And in the past few years, an even bigger threat has emerged as large constellations of satellites have been launched into low Earth orbit, in much greater numbers than ever before.

Although these satellites are important, for instance to provide Internet access to underserved regions, they have a number of detrimental effects on astronomy, owing to their brightness in the sky, their combined radio emissions and the sheer number of them. There could be up to 100 000 such satellites in orbit by the 2030s, meaning that at any point in time more than 5000 might be detectable above a typical mid-latitude observatory. In addition to disrupting visible-light observations, their radio emissions will be enough to contaminate the measurements of highly sensitive radio telescopes.

Protecting astronomical observing facilities from artificial disruptors is a primary goal of the IAU, which has recently appointed NSF’s NOIRLab and the SKAO to co-lead the new IAU Centre for the Protection of the Dark and Quiet Sky from Satellite Constellation Interference. The Centre coordinates collaborative multidisciplinary international efforts with institutions and individuals and works across multiple geographic areas to help mitigate the negative impact of satellite constellations on ground-based optical and radio astronomy observations as well as humanity’s enjoyment of the night sky.

The IAU is also involved in the international Dark and Quiet Skies collaboration dedicated to this cause. Following the last conference on the issue held in October 2021, the collaboration produced a report, available online, detailing various measures that can mitigate the effects of satellite constellations on astronomy.

The new Working Paper accepted for discussion by the STSC was positively commented on by 25 National Delegations (Algeria, Australia, Austria, Canada, Chile, China, Czechia, Finland, France, Germany, Indonesia, Italy, Mexico, Netherlands, Philippines, Portugal, Romania, Russia, Slovakia, South Africa, Spain, Switzerland, Turkey, UK, USA). Most Delegations concurred on the specific recommendations of the Working Paper, which are: to recognise that ground- and space-based astronomical research constitute an instrumental part of space exploration; to raise the attention of governments to the harm created by the uncontrolled expansion of artificial light at night; to support the adoption of the set of voluntary best-practice guidelines for satellite constellation operators; and finally to ensure that the “Impact of satellite constellations on astronomical facilities” is included on the agenda of the STSC until the issue is satisfactorily resolved. The provisional Agenda of the next (the 60th) Session of the STSC in February 2023 now includes “General Exchange of Views on Dark and Quiet Skies for Science and Society” as the tentative title of Item 17.

An international approach involving governments, industry, astronomers and citizens is essential to achieve protection for dark and quiet skies. The discussions at the sessions of the STSC were, and will continue to be, an opportunity for delegates to outline potential future actions — a key step in engaging international lawmakers in the process.

Piero Benvenuti
Director of the IAU Centre for the Protection of the Dark and Quiet Sky from Satellite
Constellation Interference
Email: piero.benvenuti@unipd.it

Connie Walker
Co-Director of the IAU Centre for the Protection of the Dark and Quiet Sky from Satellite
Constellation Interference/President of IAU Commission Protection of Existing and Potential Observatory Sites, NSF’s NOIRLab/IAU
Email: connie.walker@noirlab.edu

Federico Di Vruno
Co-Director of the IAU Centre for the Protection of the Dark and Quiet Sky from Satellite
Constellation Interference, SKAO
Email: federico.divruno@skao.int 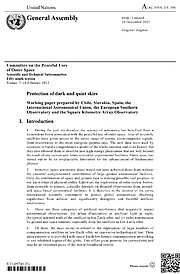