With 2009 just over the horizon, stargazers around the world are busy preparing for the International Year of Astronomy. A staggering 135 nations are collaborating to bring the Universe closer to Earth. Events and activities will take place over the coming 365 days and beyond, in a spectacle of cosmic proportions.

The International Year of Astronomy 2009 (IYA2009) has been launched by the International Astronomical Union (IAU) and the United Nations Educational, Scientific and Cultural Organization (UNESCO) under the theme, "The Universe, yours to discover". Thousands of IYA2009 events are described on the national websites, as well as on astronomy2009.org, and a few of the global projects are listed here.

The official IYA2009 Opening Ceremony will take place in Paris on 15 and 16 January 2009, and the press is invited to attend. It will feature keynote speakers, including Nobel Laureates, and live video feeds to scientists working in remote locations. Many nations are holding their own Opening Ceremonies in January and February, showing their dedication to the Year. But events will begin before then. Don't be surprised to see telescopes on the streets on New Year's Day. The IYA2009 Solar Physics Group have been busy planning a grand worldwide campaign, with over 30 countries involved at more than 150 venues, which will see amateur stargazers set up their telescopes on pavements as well as in science centres, letting passers-by observe the Sun using special safety equipment.

The Cosmic Diary is an example of a global activity occurring during 2009, with the release of its official website on New Year's Day. The project concerns the daily lives of full-time astronomers. More than 50 bloggers, professionals from over 35 countries and employed by organisations such as ESO, NASA, ESA and JAXA have already begun producing content, writing about their lives, the work they conduct and the challenges they face. The public can see what being an astronomer is really like, and how ground-breaking research is conducted. Another project, 365 Days of Astronomy, will publish one podcast per day over the entire year. The episodes will be written, recorded and produced by people around the world.

100 Hours of Astronomy, another IYA2009 Cornerstone Project, is a worldwide event taking place from 2-5 April 2009, with a wide range of public outreach activities including live webcasts, observing events and more. One of the key goals of 100 Hours of Astronomy is to have as many people as possible look through a telescope, just as Galileo did for the first time 400 years ago.

The From Earth to the Universe (FETTU) Cornerstone Project is an exhibition arranged by IYA2009 that will bring large-scale astronomical images to a wide public audience in non-traditional venues such as public parks and gardens, art museums, shopping malls and metro stations. Over 30 countries around the world are currently in the development phase of FETTU projects, many with multiple locations. Some 15 countries plan to begin FETTU exhibitions within the first month of 2009, ranging in size from 25 to over 100 images on display. FETTU will be introduced to the global community at the Opening Ceremony at UNESCO headquarters in January 2009.

The World at Night is an IYA2009 Special Project that is producing and bringing to the public a collection of stunning photographs and time-lapse videos of the world's landmarks with the sky in the background. The World at Night is preparing more than 30 exhibitions and educational events around the world.

One of IYA2009's aims is to raise awareness of light pollution, and how the beauty of the night sky is progressively being drowned out, particularly over urban areas. The project Dark Skies Awareness is tackling these issues head-on in a practical, inclusive manner. One way in which it is doing this is by holding star-counting events, where the public are encouraged to see how many stars in a particular area of the sky are actually visible from their location. When compared with data from truly dark sites, the results are often very surprising! The "How Many Stars" event will run from January 2009.

A list of event highlights is available on the official IYA2009 website, www.astronomy2009.org/highlights. From there it is also possible to contact the National Nodes, responsible for organising local events in the many participating countries.

During 2009, the sky will provide some exciting events, including the longest total solar eclipse of the 21st century, occurring on 22 July 2009 and lasting 6 minutes 39 seconds over a narrow corridor through countries including India, Bangladesh and China. A strong shower of Leonid meteors is also expected in mid-November 2009, with forecasters predicting upwards of an incredible 500 shooting stars per hour (note added 9.10.2009: the latest predictions for the 2009 Leonids predict a less impressive shower with up to 200 meteorites per hour under ideal conditions). In mid-October in the northern hemisphere, Jupiter will be placed at dusk, a perfect time to show public the giant planet and its moons. These are an impressive sight through even a small amateur telescope.

IYA2009 seeks to involve the public at large in its activities, and to this end amateur astronomers have been called upon to help organise and run events. Known for their enthusiasm, this army of helpers is growing every day, preparing to promote astronomy in a stunning variety of ways. In fact, so many thousands of people across the globe are already involved, they have formed the world's largest ever astronomy network.

Catherine Cesarsky, IAU President, says: "135 countries have committed themselves to the Year, all pulling together toward the common aim of making astronomy accessible to the public. IYA2009 will reinforce the links between science education and science careers, stimulating a long-term increase in student enrolment in the fields of science and technology and an appreciation for lifelong learning."

With such a range of activities planned, now is the ideal time to learn more about the cosmos and our place within it. The International Year of Astronomy 2009 promises to make the Universe yours to discover, beginning on 1 January 2009.

IYA2009 marks the 400th anniversary of Galileo Galilei's first astronomical observation through a telescope. It is nothing short of a worldwide celebration, promoting astronomy and its contribution to society and culture, with events at regional, national, and global levels.

The IAU is the international astronomical organisation that brings together almost 10 000 distinguished astronomers from all nations of the world. Its mission is to promote and safeguard the science of astronomy in all its aspects through international cooperation. The IAU also serves as the internationally recognised authority for assigning designations to celestial bodies and surface features on them. Founded in 1919, the IAU is the world's largest professional body for astronomers.

IYA2009 welcome video: A special welcome video for IYA2009 is available. Hosted by Catherine Cesarsky, President of the International Astronomical Union, it is approximately five minutes in length and available in English, French and Spanish. The video is available for download fromwww.astronomy2009.org. 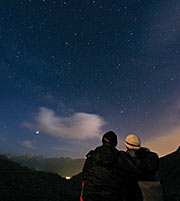