The XXVIIth General Assembly of the International Astronomical Union (IAU) had its Closing Ceremony today in Rio de Janeiro, Brazil. In addition to the discussion of new scientific results one of the major outcomes of the 2009 General Assembly is the launch of a decadal global strategy with the aim of fostering education and capacity building throughout the world.

The IAU XXVIIth General Assembly in Rio de Janeiro in Brazil had its Closing Ceremony today, Thursday 13 August 2009, after two busy weeks. The General Assembly was, as anticipated, a great success, with 2109 registered attendees from all around the world, including more than 80 members of the press. The participants attended six Symposia, sixteen Joint Discussions and ten Special Sessions and heard a balanced mix of review talks and cutting-edge presentations given by astronomers.

The General Assembly approved 889 new individual IAU members at its Closing Ceremony, bringing the total to 10 147 active members. Four new national members joined the organisation at this General Assembly: Honduras, Vietnam, Costa Rica and Panama. Outgoing General Secretary Karel van der Hucht says: "These new members are important for IAU as well as for the countries themselves". He adds: "I would also like to extend my heartfelt gratitude to the local organisers led by Daniela Lazzaro for making this immense event happen".

An important step towards encouraging smaller countries to join is the introduction of a new model for prospective membership of the IAU. This new type of membership allows new members to join the IAU with no dues for a period of six years.

Five Resolutions were approved by vote at the Closing Ceremony:  The Strategic Plan: Astronomy for the Developing World; IAU 2009 Astronomical Constants; The Second Realization of the International Celestial Reference Frame; Supporting Women in Astronomy and Defence of the Night Sky and the Right to Starlight.

The decadal plan for the global development of astronomy called "The Strategic Plan: Astronomy for the Developing World" is seen as a successor to the International Year of Astronomy 2009. The outgoing IAU President Catherine Cesarsky says: "The high points of my presidency were the preparations for and the launch of the International Year of Astronomy 2009. The Year so far has exceeded all expectations and has been an incredibly rewarding experience, which I will never forget. The new plan for astronomy development is a natural successor to the IYA2009. Inevitably it can only cover a subset of IAU activities, but our work in the developing world is vital".

IAU Vice-President George Miley spearheaded this effort and says: "Astronomy can play a unique role in furthering education and capacity building throughout the world in support of the UN Millennium Development Goals. This programme aims at using the momentum from the IYA2009 and its immense network of 145 countries. There are many existing programmes working on furthering astronomy in the developing world inside and outside the IAU. The plan calls for a cost-effective mobilization of creative scientists, engineers and teachers in the service of international development".

The incoming IAU President, Robert Williams, says: "We are now undertaking the difficult task of raising the necessary funds and finding a home for the Global Astronomy for Development Office. This is a pioneering effort for a scientific union like ours".

The IAU is the international astronomical organisation that brings together more than 10 000 distinguished astronomers from all nations of the world. Its mission is to promote and safeguard the science of astronomy in all its aspects through international cooperation. The IAU also serves as the internationally recognised authority for assigning designations to celestial bodies and the surface features on them. Founded in 1919, the IAU is the world's largest professional body for astronomers. 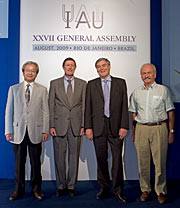