Charles Steidel, the Lee A. DuBridge Professor of Astronomy at the California Institute of Technology, is the recipient of the 2010 Cosmology Prize of The Peter and Patricia Gruber Foundation in recognition of his revolutionary studies of the most distant galaxies in the Universe.

“Professor Steidel pioneered the techniques needed to find young galaxies and led the efforts that have opened a direct observational window to a time when the Universe was only about one tenth of its current age,” reads the official citation. Steidel will receive the $500,000 award, as well as a gold medal, in October at the University of Chicago in Chicago, Illinois, where he will also deliver a lecture.

As recently as the 1920s, astronomers were uncertain whether our galaxy, the Milky Way, was the Universe in its entirety. In 1923, Edwin Hubble found conclusive evidence that other galaxies exist outside our own. Six years later, he discovered that galaxies tend to be receding from one another at rates roughly proportional to their distances — the farther, the faster. While the discovery of cosmic expansion inaugurated a decades-long investigation into the implications of a Universe that changes over time — including the Big Bang, the rate of the expansion, and the fate of the Universe — Steidel’s work is in a way a return to cosmology’s roots: the galaxies themselves.

“My main scientific interest is, and has been, how the galaxies got there,” says Steidel. How did the first galaxies form? When did they form? Has the way that galaxies form changed over tim

In order to answer these questions, astronomers need to observe galaxies at different stages of the Universe’s history. Because the speed of light is finite, the light from an object takes time to reach us. The more distant an object is, the longer its light has taken; the farther away in space it is, the further back in time. In the early 1990s, Steidel set out to discover an abundance of so-called “primordial galaxies,” dating from a period more than 12 billion years ago, when the Universe was less than two billion years old.

Astronomers had already observed a handful of objects at that distance, but most were extreme objects like quasars and not normal, star-forming galaxies. Steidel and his colleagues would try to make that determination using a technique that relies on a telltale signature in a galaxy’s light spectrum. Stars, and therefore galaxies, are rich in hydrogen, and hydrogen absorbs radiation with wavelengths shorter than 91.2 nanometres (billionths of a meter) — what astronomers call the Lyman limit. As a result, galaxies are mostly invisible below the Lyman limit, in the far ultraviolet region of the electromagnetic spectrum, but visible above it. Although light with a wavelength of 91.2 nanometres is not accessible on Earth due to the interference of the atmosphere, Steidel and his colleagues knew that the expansion of the Universe would stretch the length of the waves until they are visible. And they knew a wave of light with a length of 91.2 nanometres that has traveled 12 billion light-years would have stretched to a length of 360 nanometres. If they could observe these distant objects and detect a sharp cutoff, or break, at that wavelength, they would know the objects were galaxies.

After outlining their approach in papers now considered classics, Steidel and his colleagues discovered their first batch of Lyman Break Galaxies in October 1995, using the recently-commissioned 10-meter W.M. Keck telescope in Hawaii, at that time the most powerful telescope on Earth.

“It was a totally unexplored region,” Steidel says. His team’s subsequent observations showed that even at such an early point in the Universe’s evolution, galaxies were common.

In the past five years, Steidel has extended his study of galaxy formation by moving somewhat forward in time, to the period about 10 to 12 billion years ago — a peak era for star formation, supernova explosions, and the accumulation of gas by supermassive black holes. This year he is publishing his first paper about a new technique that uses multiple “skewers” of one-dimensional views through the Universe to create a composite 3-D view of these highly active galaxies spewing gas into intergalactic space. Using this method, Steidel and his team have discovered that a galaxy can influence a region in space one hundred times the diameter of the galaxy itself.

“How do you efficiently find lots and lots of galaxies wherever you want to point in the sky at a particular distance in order to isolate a particular period in the history of the Universe?” Steidel says. Over the past twenty years, he has provided many of the answers — and helped cosmology expand from the study of the evolution of the Universe as a whole to the evolution of its parts.

The IAU is the international astronomical organisation that brings together almost 10,000 distinguished astronomers from all nations of the world. Its mission is to promote and safeguard the science of astronomy in all its aspects through international cooperation. The IAU also serves as the internationally recognised authority for assigning designations to celestial bodies and the surface features on them. Founded in 1919, the IAU is the world’s largest professional body for astronomers.

The Gruber Prize Program honours contemporary individuals in the fields of Cosmology, Genetics, Neuroscience, Justice and Women’s Rights, whose groundbreaking work provides new models that inspire and enable fundamental shifts in knowledge and culture. The Selection Advisory Boards choose individuals whose contributions in their respective fields advance our knowledge, potentially have a profound impact on our lives, and, in the case of the Justice and Women’s Rights Prizes, demonstrate courage and commitment in the face of significant obstacles.

In 2000, the Peter Gruber Foundation and the International Astronomical Union (IAU) announced an agreement by which the IAU provides its expertise and contacts with professional astronomers worldwide for the nomination and selection of Cosmology Prize winners. Under the agreement, the Peter Gruber Foundation also funds a fellowship programme for young astronomers, with the aim of promoting the continued recruitment of new talent into the field.

The official citation reads: The Peter and Patricia Gruber Foundation proudly presents the 2010 Cosmology Prize to Charles Steidel for his groundbreaking studies of the distant Universe.

Professor Steidel pioneered the techniques needed to find young galaxies and led the efforts that have opened a direct observational window to a time when the Universe was only about one tenth of its current age. This breakthrough has allowed us to witness first-hand the dramatic transformation galaxies undergo throughout their lives, and has revolutionized, challenged, and inspired our current understanding of how structures form and evolve in the Universe. 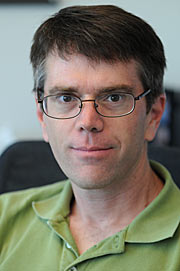