The South African Minister of Science and Technology, Mrs Naledi Pandor, today launched the IAU Global Office of Astronomy for Development at the headquarters of the South African Astronomical Observatory.

The Global Office of Astronomy for Development (OAD) is a partnership between the IAU and the South African National Research Foundation to coordinate a wide range of worldwide activities designed to use astronomy as a tool for education and development. This is part of the realisation of a visionary decadal plan by the IAU entitled “Astronomy for the Developing World”. This plan aims to use astronomy to stimulate development at all levels including primary, secondary and tertiary education, science research and the public understanding of science, building on the success of the International Year of Astronomy 2009. In a strong partnership between the IAU and the South African government, the OAD began its work on 1st March 2011.

According to Minister Pandor, “In South Africa, people in the astronomy field, from those working on the ground to the highest levels of government, share the vision that astronomy will play a significant role in the development of society.”

The President of the IAU, Prof Robert Williams, who also spoke at the launch, said: “Astronomy has incredible potential to impact on the developmental aspirations of Africa and the rest of the world. It is appropriate that this global coordinating office be situated in Sub-Saharan Africa as this is a focus region for the IAU’s strategic plan.”

This event takes place immediately following the second IAU regional meeting for the Middle East and Africa (MEARIMII), which brought together astronomers and astronomy students from this vast region. Many of these conference participants were in attendance at the launch.

Pheneas Nkundabakura, a young astronomer from Rwanda, said: “This is a very important occasion for all of Africa, as it represents a project where the continent will take on a leadership role in coordinating a global development activity. South Africa has demonstrated its capacity to host this office on behalf of Africa, through the training of astronomers like myself and in supporting astronomy development across the continent.”

Kevin Govender, the first Director of the OAD, expanded on this: “Although Africa will remain a region of strong focus, which is in accordance with the IAU strategic plan, the OAD actually has a global role to play, and lessons from developments in Africa and other parts of the world will be used to impact on every part of the world. I look forward to interacting with the broader astronomy community, both amateur and professional, to see how we can together realise the incredible potential of astronomy for development.”

The OAD will mobilise talented professional and amateur astronomers, engineers and teachers around the world in the service of developing countries. The wide range of activities that will be coordinated by the OAD include the education of young disadvantaged children, science education at all levels, the training of school teachers and building up research capacity in university departments throughout the developing world.

The IAU is an international astronomical organisation of about 10 000 professional astronomers from 90 countries. Its mission is to promote and safeguard the science of astronomy in all its aspects through international cooperation. The IAU also serves as the internationally recognised authority for assigning designations to celestial bodies and surface features on them. In 2009, the IAU coordinated the International Year of Astronomy 2009, the largest science education and public outreach event in history, reaching hundreds of millions of people in 148 countries.

The International Year of Astronomy 2009, endorsed by the UN and UNESCO, drew together over 140 nations to participate in countless activities with the slogan “The Universe, Yours to Discover”. Over 800 million people are estimated to have taken part in these activities, in the course of which it became very clear that astronomy was of huge interest to the general public and particularly to children. It was seen as an effective way of encouraging children to take an interest in science, with particular benefit in less well developed countries. 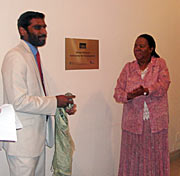