The first international comparative list of astronomical words in sign languages is now available. As part of this proposal, the Encyclopedic Dictionary of Astronomy for Sign Languages has been translated into English and Spanish and is now available online. This is the result of a long-term project developed by the IAU Commission C1 Education and Development of Astronomy and its WG3 Astronomy for Equity and Inclusion. The new list currently includes 47 words most commonly used in education.

During the International Year of Astronomy in 2009, an encyclopedic dictionary of astronomy for French Sign Language, entitled Hands in the Stars, was published under the direction of Dominique Proust [1]. This dictionary contains approximately 300 signs describing several classical celestial bodies such as planets, asteroids, galaxies and quasars, as well as technical terms such as telescope, spectrograph and photometry. In 2016–2017, a large project led by the IAU Commission for Astronomy, Equity and Inclusion (IAU Division C, Commission C1 WG3), with funding from the IAU Office of Astronomy for Development, translated Proust’s dictionary into English (by Lawrence Augustin Orchard) and Spanish (by Maria Roser García and Amelia Ortiz-Gil). The dictionary can be accessed from the website of the Commission through these links: French,  English and Spanish.

Based on this previous experience, the Commission recently embarked on a long-term project to collect the different signs in several languages, starting with a selection of 47 words that the experts of the Commission agree are amongst the most commonly used in astronomy education and outreach. The languages involved include German, Italian, Portuguese, Japanese and Polish, among others.

Sign language is now officially practised in almost every country, but diverse heritages and different cultures independently developed specific signs to designate common objects or identical situations. “A Universal Sign Language is gradually being developed, mainly to designate objects and situations related to contemporary technology or events. Nevertheless, there will always be differences between signs in each country that need to be noted, as countries have developed its own signs through time”, says Dominique Proust [2].

Many astronomical words have no equivalent hand sign in any sign language. The signs presented in this list represent a collaboration between deaf communities, educators, and astronomers all over the world. The suggested signs are meant to engage the deaf community in scientific discussion.

The compilation of 47 terms is also available online here. Its main goal is to help to reflect on the differences between the various languages, perhaps even helping communities to develop their own sign if they did not yet have one for a particular term. The work is a joint ongoing effort between many individuals and organisations [3]. Signs in some of the languages have been retrieved from the Spread the Sign project.

The group working on this task is also analysing the case of words without a sign in some countries. One alternative could be to suggest the use of the sign of a closely related language, for example, Spanish for the Italian community.

The Commission is also considering the possibility of studying each sign in order to determine the similarities and differences between different languages and suggest, if possible, a common and unique sign for each word for every country. This may be an impossible task, but it is one worth exploring.

[1] In France, the Encyclopedic Dictionary of Astronomy for the French Sign Language was published in 2009 under the direction of Dominique Proust, in collaboration with Daniel Abbou, Nasro Chab, Yves Delaporte, Carole Marion and Blandine Proust, in Burillier, in the framework of the International Year of Astronomy (IYA2009) and with the support of the Paris Observatory.

[2] Sign language has its own vocabulary and grammar and is expressed in all communication registers. Large numbers (such as millions and billions) have their own signs, as do operators. All mathematical quantities have equivalent signs, including weight, area, volume and distance. The Pythagorean theorem is expressed in a similar way to its oral version, except that the hypotenuse is signed “the side facing the right angle”. The geometry exposes itself in an identical way, the hands describing previously a line, a plane or a volume. The origin of a coordinate system is precisely indicated.

Physics includes a set of very explicit signs for each topic. The constants are designated by the same letters: c is the speed of light (SPEED sign + LIGHT sign) with c = 300 000 km/s. Electricity is signed with the fists facing each other, curved index fingers pointing upwards like electrodes.

Nuclear energy includes two signs, the first being the generic sign for all forms of energy and the second symbolising the power of nuclear energy. In chemistry, the elements are signed either specifically or by their symbol.

Astronomy is one of the fields where the expression in sign language is both rigorous and poetic. The signs attributed to the various planets of the Solar System make use of their own characteristics: Mercury is very close to the Sun, Mars is red, Jupiter is represented by the famous red spot, and Saturn is characterised by its rings. The representation of the sky is easy since the majority of the constellations evoke animals or objects that already have a sign: bear (large or small), swan, fish, whale, etc. The mythological names respect the legendary traditions. Thus, Orion is a hunter, and the Centaur is a man mounted on a horse's body.

Scientific technology can also be expressed in sign language, including different types of computers (PC, laptops, etc.). In the same way, the fields of medicine and biology have a very complete and very technical vocabulary.

[3] The collaborators of the project are:

The IAU Working Group for Astronomy, Equity and Inclusion (IAU Division C, commission C1 WG3) seeks to build new strategies, tools and resources in Astronomy that will facilitate the access to Astronomical resources and careers for people with special intellectual or physical needs, or to those who might be excluded for the particular race or gender. 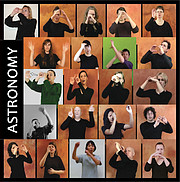