The Above and Beyond open-source exhibition was launched today at the International Astronomical Union (IAU) General Assembly in Vienna, Austria. The exhibition — commissioned within the framework of the IAU 100th anniversary celebrations — showcases some of the most significant and surprising astronomical breakthroughs that have shaped science, technology and culture over the last century. Designed in the spirit of open science, it is available as a travelling exhibition, touring major European cities in 2018 and 2019. It will also be available as an open source to develop a variety of exhibition experiences worldwide.

The exhibition has an interdisciplinary and international scope, outlining that scientific discovery is not a one-off endeavour but a continuous process that takes decades to fully grasp and comprehend. It is underpinned by three core questions that are just as penetrating today as they were a century ago: What is the size and structure of the Universe? Is there life beyond the Earth? What powers the stars, how do they begin to shine and what happens when they die?

"Astronomical discoveries and their social implications are an incredibly graceful and stimulating subject for engaging storytelling. The last century has seen unparalleled progress in the field that sometimes doesn’t receive due credit or recognition. We’re excited that this travelling exhibition and its open model will help to strengthen this message.” say Lukasz Alwast and Jan Pomierny, creators of the exhibition and Partners at Science Now.

In 2018 and 2019, the exhibition will travel to major cities, including Brussels (Belgium), Garching (Germany), Leiden (the Netherlands), Paris (France), Rome (Italy) and Warsaw (Poland) among others.

Above and Beyond is designed as an open-source model to bring beautiful and insightful astronomical storytelling to the general public. All of its contents and designs will be available under a Creative Commons licence (Attribution NoDerivatives International 4.0, with localisation allowed), with all materials available for public use from September 2018.

The exhibition is being launched within the framework of the IAU’s 100th anniversary in 2019. To commemorate this milestone, the IAU is organising a year-long celebration to increase awareness of a century of astronomical discoveries and to support and improve the use of astronomy as a tool for education, development and diplomacy under the overarching theme Under One Sky.

The exhibition is a joint collaboration between the IAU and the science communication and strategic design studio Science Now.

“The Above and Beyond exhibition provides a wonderful overview of the amazing discoveries in astronomy during the past century as well as the open questions about the Universe that we will address in the coming years. It also highlights the worldwide fascination with astronomy in everyday life”, said Ewine van Dishoeck, IAU President-Elect and IAU100 Task Force Chair.

Science Now is a multidisciplinary science & strategic design studio specialising in various forms of science & technology communication, R&D and new venture development. The team is composed of a group of experienced producers, scientists, artists and communicators. It is the studio behind the development of the Ambition and Rosetta VR projects for the European Space Agency as well as a variety of other educational and R&D initiatives. 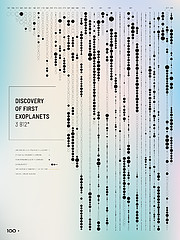 PR Image iau1808i
IAU100 Above and Beyond exhibition

PR Image iau1808j
IAU100 Above and Beyond exhibition