New Book about the IAU Published
Click to Enlarge

A new book, entitled "The International Astronomical Union — Uniting the Community for 100 Years", has just been published by Springer. In this, the centenary year of the IAU’s founding, the book chronicles the first 100 years of the IAU, its accomplishments and its evolving place in society.

The International Astronomical Union (IAU) was founded in 1919, in the wake of the First World War, together with its sister Unions in related natural sciences. Featuring new photos and personal interviews with many of the key actors since 1964, this book presents the evolution of the Union from an organisation purely for professional astronomy to a visible ambassador for astronomy in society at large.

A joint effort by authors from both within and outside the IAU, the book presents inside and outside perspectives of the Union against the backdrop of the historical, scientific and technological developments of the past 100 years. While much important scientific progress took place before 1945, the book naturally focuses on the accelerating evolution during the second half of the century.

The IAU General Secretary, Teresa Lago, said: “This book shows the interesting evolution of the IAU over the last decades from a ‘science-only’ organisation to a scientific organisation that also engages in societal issues, such as education and public understanding of the fantastic discoveries of modern astronomy”.

The IAU has itself evolved significantly in the past few decades, broadening its previously narrow focus to include societally relevant activities, such as addressing the hazard of asteroid impacts, the planetary status of Pluto in the Solar System, and the hugely successful International Year of Astronomy. Most recently, it has been spearheading a combination of science literacy and public outreach projects.

The book is of interest to both professional astronomers and an astronomically interested general audience. The authors are former IAU General Secretary Johannes Andersen (Denmark), science historian David Baneke (Netherlands), and Claus Madsen (Denmark) a former outreach and policy officer at ESO. 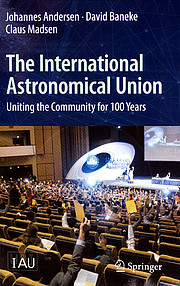 PR Image iau1902a
Cover of the new book about the IAU