2019 marks the 100th anniversary of the paradigm-shifting solar eclipse observations that successfully tested Einstein’s general theory of relativity for the first time. The International Astronomical Union, within the framework of its own centenary celebrations, is supporting various initiatives on the theme of the 1919 Solar Eclipse, including conferences, celebratory events, educational activities, and more. This also includes a celebration in São Tomé and Príncipe with the participation of the President of São Tomé and Príncipe and the President of Portugal.

In 1915, Albert Einstein published his general theory of relativity, which to this day remains the best description of gravitation that physicists have. Shortly thereafter, the British astronomer Sir Arthur Eddington set out to verify it experimentally, by testing its prediction that light would be deflected by the Sun. Since the experiment involved viewing stars that are close to the Sun, it could only be conducted during a total solar eclipse. The solar eclipse of 29 May 1919 presented the perfect opportunity to take the measurements, so expeditions were organised to two locations where the eclipse would be total: Sobral (Brazil) and São Tomé and Príncipe off the coast of Africa. Sir Frank Watson Dyson coordinated the expeditions from England, dispatching Eddington to Príncipe and French astronomer Andrew Crommelin to Sobral. The results were compatible with Einstein’s theory and diverged significantly from Newtonian gravity. Since then, many further experiments have been carried out to test general relativity, which is widely used in modern physics and astrophysics.

In 2019, the International Astronomical Union, as part of its centenary celebrations, is commemorating the 100th anniversary of the 1919 solar eclipse by supporting several initiatives worldwide:

“The scientific expedition to observe the eclipse in 1919 triggered not only a scientific revolution, but it also serves as a remarkable example of how international scientific collaboration can bring people together, even in times of conflict”, shared Ewine van Dishoeck, Leiden University professor and president of the International Astronomical Union. “The centennial anniversary of both the IAU and the 1919 solar eclipse represents a special opportunity to reflect upon and celebrate important astronomy milestones throughout the past century, together Under One Sky.”

IAU General Secretary Teresa Lago said “It is thrilling to be at the very site where Eddington carried out such relevant observations 100 years ago, and to join in the celebrations, which also include the opening of a centre for Education and Outreach in Roça Sundy. The IAU could not feel more at home”. 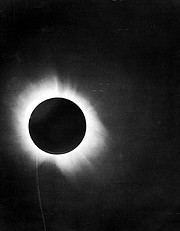