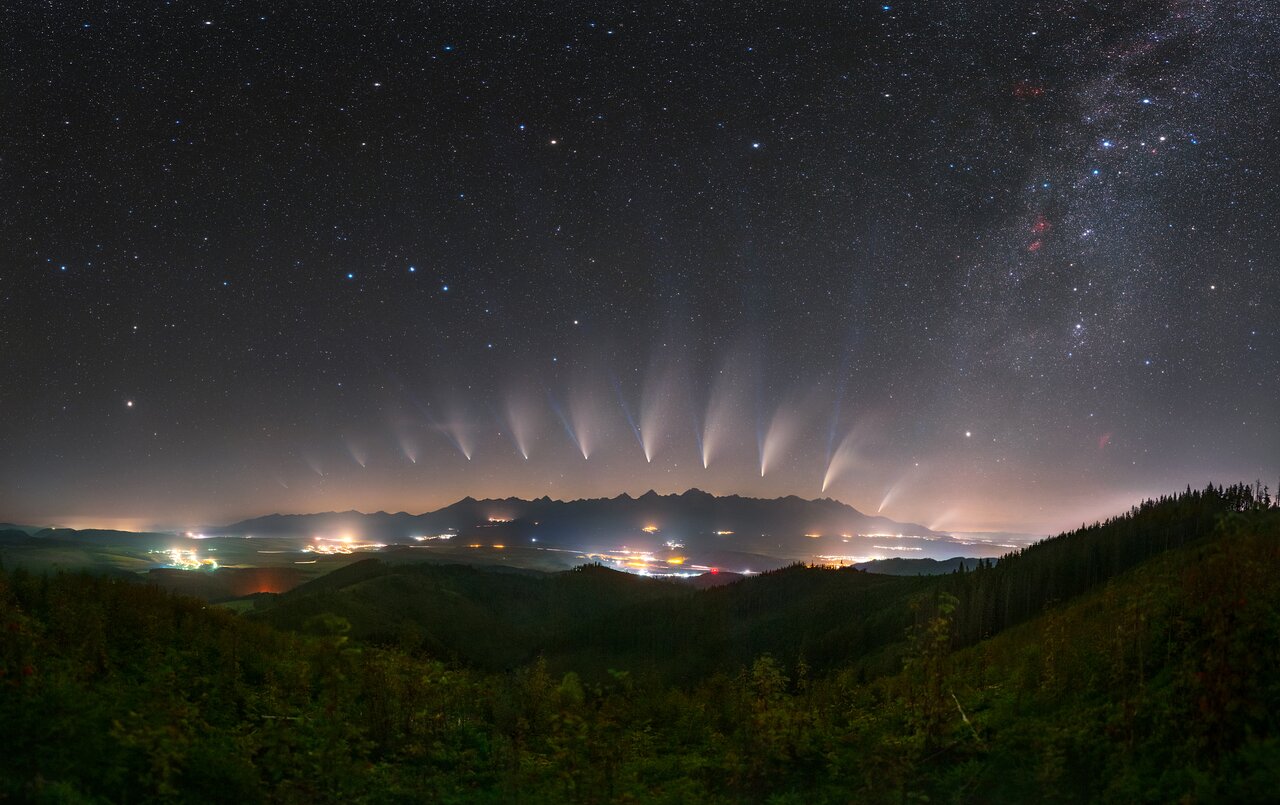 This image uses the chronophotography technique to capture the evolution of the comet C/2020 F3 (Neowise) over time, as it became visible in the northern skies in July 2020. Orbits of comets are extremely elliptical, which means that during part of their orbit they get close to the Sun. As a comet approaches the Sun, it gets heated, releases gas and dust creating an envelope or coma around the nucleus. The solar wind and photons (particles of electromagnetic radiation) interact with the coma producing the cometary tail, which can be seen clearly in this image. The tail of a comet always points away from the Sun, and extends as much as tens of millions of kilometres. This tail has two parts: the relatively straight bluish gas (ion or plasma) tail, which is made up of charged particles interacting with the magnetic fields of the solar wind; and the whitish dust tail compose of very small dust particles that are pushed by the radiation pressure from the Sun into a curve due to their slower speeds. Two regions in the Solar System are often associated with being “storehouses” of comets: the Kuiper Belt and the Oort Cloud. Comets with periods up to about two hundred years come from the Kuiper belt, a reservoir of cometary nuclei material with a disk-like shape located beyond Neptune. Longer period comets come from the Oort cloud, another huge reservoir of icy objects, with a spherical shape surrounding the Solar System. The outer limit of the Oort Cloud is not known as yet, but it could be as much as 10 thousand times the Sun-Earth distance, or even more. Due to gravitational disturbances, some of these cometary nuclei might be ejected towards the inner regions of the Solar System, sometimes approaching the Earth, offering some of the most spectacular views of a celestial body. The image also shows some prominent constellations and asterisms like the Big and Little Dippers, and also the North (Pole) Star – Polaris. This mosaic image was taken in different locations in Slovakia, Czech Republic and Greece from 9th of July 2020 (first comet image on the right) and 2nd of August 2020 (last image of the comet on the left), and finally stacked with a background image taken from the Kozi Kamen mount in Slovakia.