Last year the IAU announced the creation of a new award, the IAU PhD Prize, to recognise outstanding scientific achievement in astronomy by PhD students around the world. In fact it is a series of awards, as each of the IAU’s nine Divisions [1] selects a winner in its own field of astronomy.

At the 99th Meeting of the IAU Executive Committee the first winners of the IAU PhD Prize, for the 2016 year, were selected. They are:

Division A: none (no valid candidates)

Division C: none (no candidates)

Division H: Yang Huang, Peking University, Beijing China, Stellar parameter determinations, and chemical and kinematical properties of the Milky Way based on the LAMOST Spectroscopic Survey of the Galactic Anti-Center

34 candidates submitted their PhD theses by the 15 December deadline and most of them were judged excellent by the evaluation panel of the relevant Division, making the selection particularly hard. In one case (Division F), there was a clear tie and the two winners will share the prize.

Each recipient receives airfare, registration fee and accommodation to attend the next IAU General Assembly, to be held between 20 and 31 August 2018 in Vienna, Austria, where their certificates will be awarded. The winners will also have the opportunity to present their research work in one of the sessions of the General Assembly.

The IAU congratulates all these winners, wishes them every success in their future careers, and looks forward to another crop of high-quality applications for next year’s award. The 2017 round is open for submissions until 15 December; the next set of winners will be announced in spring 2018 so they will also have the opportunity to attend the General Assembly in Vienna.

Candidates for the IAU PhD Prize were required to submit, among other items, an abstract of their thesis that is suitable for public consumption, a 1500-word thesis summary, three letters of recommendation (including one from the PhD advisor) and a CV. The winner of each Division was decided by the Division’s own standards and methods — guided by the Division Steering Committee.The IAU PhD Prize is open to candidates from any country, regardless of whether the country has an IAU National Membership. On top of this, a separate prize is available to be awarded to applicants from developing countries (defined as those not in the OECD). The deadline for all applications is 15 December every year, to include all applications since the previous year’s deadline.

[1] The IAU’s nine Divisions are as follows: 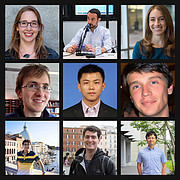