The IAU100 initiative exceeded initial expectations with over 5000 registered activities in 143 countries, and facilitated the direct involvement of an estimated 5 to 10 million people along with an  estimated further reach of 100 million people through communication activities. The IAU 100th Anniversary Celebrations Final Report showcases the implemented activities, event highlights, finances, communications, impact numbers and IAU100 legacy.

Throughout 2019, millions of people around the world celebrated the astronomical breakthroughs that have shaped science, technology and culture over the last century. The IAU100 celebrations highlighted the importance of astronomy as a tool for education, development and diplomacy.

The IAU100 celebrations started with the 100 Hours of Astronomy event in January 2019, which brought together over 100 000 amateur and professional astronomers, astronomy enthusiasts and the general public to share their passion for astronomy and space. The closing IAU100 event was the Pale Blue Dot global project in February 2020, which collectively united people from all cultures and backgrounds on the occasion of the 30th anniversary of the iconic Pale Blue Dot to address how astronomy shows us the place of our home planet in the Universe and can help us find solutions to today’s global challenges.

The project with the greatest reach was the IAU100 NameExoWorlds initiative that engaged over 780 000 people in 113 countries in the naming of star and exoplanet systems. A keystone event was the IAU 1919–2019: 100 Years Under One Sky Celebration Flagship Ceremony that took place at the Palace of the Academies in Brussels (Belgium) — the very same venue where the IAU was founded back in 1919. The IAU100 Ceremony brought together 250 participants from 67 different countries to reflect on astronomy with and for society and to discuss what will come next. The Flagship Ceremony concluded with the first IAU event for amateur astronomers, which strengthened the relationship between the IAU and amateur astronomers and their organisations.

For 2019, the IAU developed the Above and Beyond exhibition, which showcases the  past century of fascinating astronomical discoveries and was on display in more than 75 countries worldwide. The IAU100 Moon Landing 50 Global Project was the largest coordinated action around the world celebrating the 50th anniversary of the Moon landing, with more than 1 million people actively participating in over 1000 events in 128 countries and regions. IAU100 also supported 22 Special Projects that were each awarded a micro-grant to organise national and local initiatives that reflect the goals of the IAU100 celebrations. Three projects from the IAU Office of Astronomy for Development (OAD) were also enabled by IAU100, notably the Columba-Hypatia: Astronomy for Peace project (Cyprus), the Development of AstroTourism Globally project (Armenia) and the Global Techno Apps Challenge project (Palestine). The IAU100 Final report provides further detail about all of the activities and global events conducted throughout 2019.

"The success of IAU100 is due to the thousands of volunteers who worked so hard and so enthusiastically for more than a year to enable all of these projects and to engage with their communities. A big salute to them and to the IAU100 Partners who made the celebrations possible. In our rapidly changing world, the IAU100 message ‘Under One Sky’ and the inspiration that astronomy brings for development, education, and diplomacy are more important than ever," said IAU President Ewine van Dishoeck.

Educational actions were a key focus of IAU100 and programmes such as IAU100 Einstein Schools, the IAU100 teacher training actions and the materials distributed in schools will benefit thousands of students in the years to come. At the end of 2019, the IAU established the IAU Office of Astronomy Education (hosted by Haus der Astronomie in Heidelberg, Germany) to capitalise on the IAU and its community experience and knowhow in astronomy education. IAU100 actions also had a strong focus on fostering more diverse, inclusive and egalitarian actions. The success of initiatives around the world such as the IAU Women and Girls in Astronomy events, the establishment of the Inclusive Astronomy website that compiled guidelines and best practices, and the Inspiring Stars exhibition will continue, as similar actions are still being planned in the near future.

An important IAU100 legacy comes in the form of the annual IAU Global Outreach Events established by the IAU Office for Astronomy Outreach, where the National Outreach Coordinators (NOCs) are once again at the core of the national implementation and dissemination of these global events. Another outcome is the establishment of a central platform for event organisers around the world to showcase their astronomy activities, serving as an inspiration to other event organisers. As the world struggles to contain the spread of COVID-19, the IAU OAO and NOCs are adapting many of these programmes to online settings. The IAU is encouraging outreach professionals, educators, amateur and professional astronomers, and astronomy enthusiasts to organise online events that offer new opportunities to connect people worldwide. One example is the Meet the IAU Astronomers! that bridges outreach professionals to nearly 200 astronomers to participate in online meet-ups, talks and Q&A sessions.

The network behind the implementation of the IAU100 actions had as its aim to keep alive the flame that was lit worldwide by the IAU during the International Year of Astronomy 2009. May the astronomical community continue to be "Under One Sky" for the next 100 years!

The IAU100 Partners are: 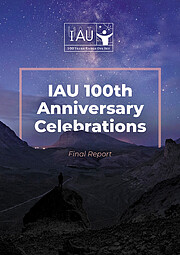