Scientists are tapping into photographs taken by astronauts aboard the International Space Station (ISS) to reliably measure the amount of light pollution worldwide. This study not only includes the well-known signatures of cities and streets, but also the effects of faint indirectly scattered light, which up to now had not been measured quantitatively. The new results confirm that this diffuse glow, which is seen from space, is scattered light from streetlights and buildings. This is the component responsible for the brightening of the night skies in and around cities, which drastically limits the visibility of faint stars and the Milky Way. The team also concludes that European countries and cities with a higher public debt also have higher energy consumption for street lighting per inhabitant, and that the total cost of the energy consumption for street lights is 6300 million euros/year in the European Union. The findings were presented today at the IAU XXIX General Assembly in Honolulu, Hawaii.

In a remarkable new study, scientists from the Universidad Complutense de Madrid, Spain and the Cégep de Sherbrooke in Canada, together with members of the public, have worked on a project called Cities at Night. The aim is to produce a global colour map of the Earth [1] at night from pictures taken by astronauts on the International Space Station using a standard digital camera.

Starting in July 2014, this huge project required the cataloging of over 130 000 images — the ISS’s entire high-resolution archive — and geo-referencing them to place them on a map. The images were also calibrated using the stars in the background sky over the ISS, as well as ground-based measurements of the night sky brightness [2].

A diffuse light present around cities, in addition to the familiar bright lights from streets and factories, was previously detected by the Defense Meteorological Satellite Program, but its nature remained unknown; the satellite’s low-resolution cameras could not distinguish it from other instrumental factors. However, the high-resolution images captured by the astronauts — in addition to an extensive sky brightness survey conducted around Madrid — have now allowed scientists to observe the direct relationship between the diffuse light observed and light pollution from artificial lights.

Using the ISS astronaut images, as well as data from the Defense Meteorological Satellite Program and the Suomi National Polar-orbiting Partnership Satellite, the researchers also discovered that European countries and cities that have a higher public debt [3] also have a higher energy consumption of street lighting per inhabitant. The total cost of the energy consumption for streetlights is estimated by the study to be 6300 million euros/year in the European Union. The different ways of calculating streetlight energy costs across Europe previously made such an estimate impossible.

This citizen science project is vital for researchers from many scientific fields. Studying lighting technology from orbit is currently of even greater importance now than before due to massive transitions to LED technology [4]. The ISS is the only place from which it is possible to estimate the prevalence of the different types of lighting technologies used in cities around the world and to measure the impact of light pollution on the environment and human health.

“Until the advent of new satellites, astronaut photography was our only colour and high-resolution window on the Earth,” says lead scientist Alejandro Sánchez de Miguel.

After gaining the initial support of multiple institutions [5] and thousands of volunteers, the next phase of the Cities at Night project aims to gather funding to keep the project running, so it can extend its colour map of the nightside of the Earth.

[2] Only RAW images can be used for scientific photometry after taking into account the instrumental effects of the digital SLR camera used.

[3] The General government gross debt for 2014 was used, as calculated by EuroStat.

[4] LED streetlights have been installed or announced for installation in several large cities as well as smaller cities throughout the world. LED street lights make light pollution — such as sky glow — significantly worse, as they emit more blue and green light than the high-pressure sodium lights that they typically replace.

[5] NASA, ESA and the Canadian Space Agency (CSA) helped by giving the project visibility, while Google Outreach and Cartodb helped with the visualisation of the products. MediaLab-Prado assisted with the design of the web pages and Crowdcrafting/Scifabrik supported the hosting of the citizen science programme. Kickstarter and the Sociedad Española de Astronomía helped to organise transport to conferences to present the results, and the Universidad Complutense de Madrid and the Cégep de Sherbrooke hosted the researchers. 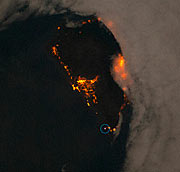