On the occasion of the 2018 General Assembly, 10 new National Members joined the IAU: Algeria, Cyprus, Ghana, Jordan, Madagascar, Morocco, Mozambique, Slovenia, Syria and the United Arab Emirates. This brings the total IAU membership to 83 countries (National Members). At the Closing Ceremony, the General Assembly also approved 1248 new IAU members, bringing the total to over 13 500 members. Some of the new members have been accepted into two newly established categories: junior members and honorary members.

Of the Individual and Junior Members who joined the IAU on the occasion of this year’s General Assembly, 30% were female, which is a significant improvement on the previous gender balance in the Union — just 18% female Members.

Five new Resolutions were presented and voted on at the General Assembly:

All five Resolutions were accepted by the General Assembly, although Resolution B4 — the proposition to rename the Hubble Law as the Hubble-Lemaître law — will, in addition, be voted on electronically by all IAU members in the fourth quarter of 2018, in order to ensure wider participation in the decision. Prior to the General Assembly, Resolution B4 was also submitted to a period of extensive consultation with the community.

One of the highlights of the General Assembly included the launch of the IAU100 project, the IAU100 exhibition, which presented highlights in the development of astronomy and space research since the foundation of the IAU. There were also celebrations such as the first decade of Austrian participation in ESO, as well as 50 years of the Astronomy & Astrophysics journal. Awards and certificates were presented to the IAU PhD Prize winners, as well as to other distinguished Union members including Carolina Ödman for her pioneering work in astronomy outreach, development and education.

The 2018 General Assembly also featured the launch of Inspiring Stars, a travelling international exhibition that allows audiences to experience astronomy as a universal science that celebrates, encourages, reinforces and addresses diversity and inclusion in both education and teaching, as well as at a professional level.

The highly successful Young Astronomer and Women in Astronomy events included social lunches and a series of talks, the latter of which included discussions of gender statistics, gender equality issues, and gender-related initiatives from around the world.

The four IAU Officers for the next triennium are:

In his parting words, the outgoing General Secretary Piero Benvenuti said: “This has arguably been the most inclusive IAU General Assembly in history. In the halls of the Austria Center Vienna there were scores of children in and around the daycare centre, many visually impaired, people hard of hearing, and, in general, people from more countries and cultures than ever before. This makes me very happy and a little bit proud.”

During the General Assembly, many public outreach events took place in Vienna, reaching more than 2000 students and laypeople. This included 10 stargazing parties, teacher training sessions, and school visits to the exhibition hall, as well as talks and exhibitions on topics such as light pollution, and also science and art.

The IAU is the international astronomical organisation that brings together more than 13 500 professional astronomers from more than 100 countries worldwide. Its mission is to promote and safeguard the science of astronomy in all its aspects through international cooperation. The IAU also serves as the internationally recognised authority for assigning designations to celestial bodies and the surface features on them. Founded in 1919, the IAU is the world's largest professional body for astronomers. 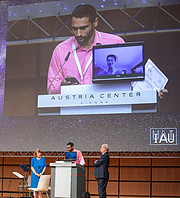 PR Image iau1810e
IAU Resolutions being presented at the GA 2018